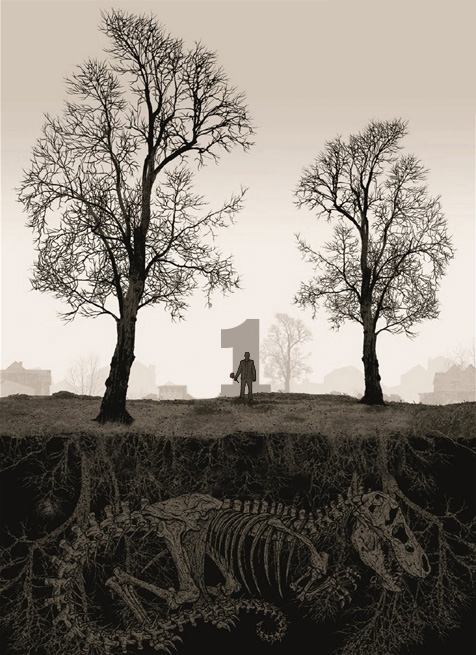 When all is said and done, 2011 will be remembered for the depths it was was willing to plumb. The festival circuits were littered with films of abuse, rape, paedophilia, rage, addiction, melancholy, murder and the end of the world – it's little wonder everyone has clung to the cinematic lifeboat that is The Artist to pull them out of an ocean of despair.

Peter Mullan is exceptional as Joseph, a man who has all but given up on life and succumbed to the fact that he is no longer in complete control of his actions – witness his utter detachment as he lobs a brick through a Post Office window; he is driven by rage, the only thing that gives him purpose. Joseph is a missile without a target, and all you can be sure of is that he is going to detonate, and there will be collateral damage.

That collateral damage takes the form of Olivia Colman's charity shop worker, Hannah; a woman who perhaps recognises in Joseph a fellow lost soul. Thrown together, they form a tentative bond of reliance, Joseph taking his last chance by resting his weary head on her spiritual shoulder, Hannah taking solace in the company of a man with no desire to belittle or abuse her. Their relationship, though brittle and apprehensive, is a beautiful thing to watch unfold, with Considine careful to never rely on genre crutches. Not once does the director dare to meddle in their affairs with clichéd tropes.

Tyrannosaur offers no easy answers; in fact, it dares suggest that sometimes there are no other answers than the ones that hurt the hardest. It is a grim portrait of depression, of self-abuse, of domestic violence and of hopelessness, but in its own perfectly formed way, it is also a story of redemption and respect; a film that pulls you out of the slump it has put you in by giving you a good, hard slap.

A fearless debut from Considine - officially the Next Big Thing in British cinema - and populated with the most powerful, unshowy, heartfelt performances you'll see all year, Tyrannosaur is the most affecting film of 2011. This is cinema that hits you like a car crash. Ali

Defining moment: Olivia Colman's mask slips completely and the full horror of her situation is revealed. A scene of such unabashed emotion and intensity, even Peter Mullan looks taken aback.

Once I'd posted my review of Tyrannosaur on Twitter, I got a nice tweet from Olivia Colman's husband telling me how much they both enjoyed it. Being a cheeky chappy, I asked if Olivia would be up for answering some questions via email, and she was, giving up a whole bus journey to reply to my stupid questions. Thanks to Olivia and Ed for this interview. 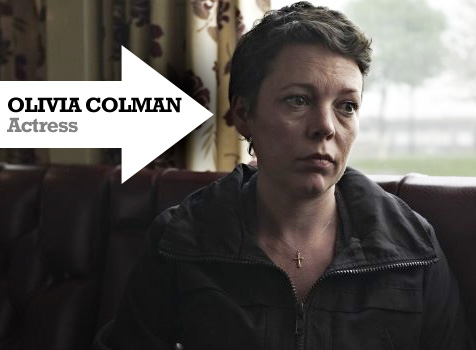 Firstly, congratulations on the film. It had me blubbering like a little girl. I'm assuming you're massively proud of it?

Olivia Colman: Thanks very much. Yes, of course I'm proud of it. Everyone who was involved in it is proud of it. It's frustrating that most people will never see it, but I think most that do see it will get it, and talk about it. It's a thought provoking film, lots to talk about. I love it.

Given your background in comedy, how did you approach a deadly serious film like Tyrannosaur?

OC: In exactly the same way as any other script. I'm an actor that just happens to have been working in comedy, not a comedian who is now acting. I did worry that I wouldn't be able to do it justice for Paddy, but I would have felt that if I'd been doing nothing but drama for the last 15 years.

Were you disappointed when you got to the set and realised it didn't have any dinosaurs in it?

OC: There are dinosaurs in it. It's just that the effects are a bit shit.

OC: Like no other. There are a thousand people who call themselves directors, some of them are really good at knowing the names of all the lights, some are really good at editing, very few of them can actually explain what they want to see. Having been an actor really helped I think. He knows that you need to feel you can trust him, that he trusts you, that you're in safe hands etc. His vision and passion were very clear, and he could make you feel 10 feet tall with just a little thumbs up. Everyone wanted to make him proud. He was extraordinary. 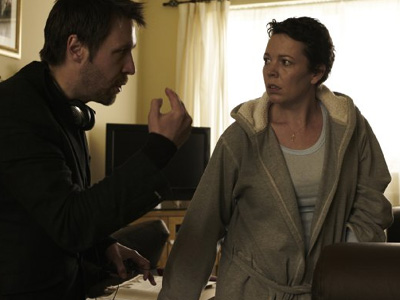 Have you ever fancied writing/directing yourself?

OC: I'm not one for false modesty, so please believe me when I say no. I'd be hopeless. 'Know your limits' is a phrase that springs to mind.

How do you not take a character like Hannah home with you at the end of the day? Was it hard to switch off from a day's filming?

OC: No. As Paddy has said, you don't want method actors anywhere near a script like that. Can you imagine? We were all very aware that we were pretending, we were being someone else for a while, but I wouldn't want to take Hannah home. You don't need to. You let it all out on set, it's very cathartic, then we would all go to the pub and have a laugh. And maybe a curry.

Peter Mullan is extraordinary. Did you ever find yourself forgetting your lines and just staring at his awesome face during shooting?

OC: Yes. But his face is completely smooth in the flesh – they add the man-face in post-production.

Is it true that Peter's real voice is actually really high-pitched and camp when he's not on camera? That's what we heard.

OC: Yes. See above. In post, they have to slow down all the dialogue when he's talking so he sounds cool and gravelly. 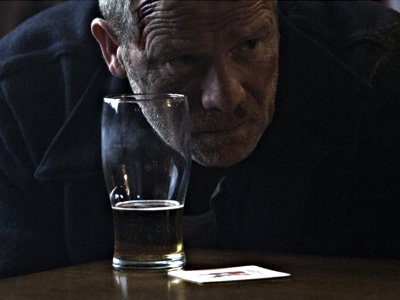 From the people who brought you Avatar.

What was your relationship like with Eddie Marsan on set? He's a real shit to you on screen so we hope he bought you lots of flowers.

OC: Nope, no flowers. What a cunt! Eddie is of course one of the sweetest men you're ever likely to meet. And acting with him, and indeed Peter, was so easy. When they're that good, you don't have to do anything, you just react to what they do. Lovely. He's also incredibly funny, he's quite 'Lee Evans' when he's on a roll.

Was the atmosphere on the set of Tyrannosaur different to a light-hearted movie like, say, Hot Fuzz?

OC: Not very different actually. Less corpsing when the camera is on, but just as much fun, giggling and booze consumption off camera. It was a lovely tight group, small cast, small crew, and we all got on really well. I think the most enjoyable time I've ever had with a new group of people.

OC: Umm. I don't know, there were beautiful moments everyday. Any thumbs up from Paddy felt brilliant. The wake was brilliant: Paddy just played music, the bar was open and he left the camera running. That was a genuinely fun day.

Going by your IMDb profile, it would appear you are 'blowing up right now'. Who was cooler to meet – Bill Murray in Hyde Park On Hudson, or Meryl Streep in The Iron Lady?

OC: Oooh, impossible to choose. It was ridiculous that I met either of them. They were both deliciously naughty. Meryl was always close to giggles, and Bill had a genuine streak of anarchy. A lovely discovery that the greats are fun, they have no reason to prove anything, no ego, they're still enjoying it.

Let's say Tyrannosaur gets the awards nominations it deserves and you find yourself at the Oscars with a nomination. Prepare a speech or just wing it?

OC: Ha! That's as likely as me growing another ear. It's incredibly frustrating. I naively assumed that awards are given to good films, but unless you've got a 'campaign' budget, that's not going to happen. If the film wins anything, and it has on the festival circuit, it would be fucking amazing. My god, we'd all pop with pride. If I won an Oscar? I'd perform an impromptu rap, of course.


So, that's us for another year. Thanks to all who joined us for making it a memorable one. Hope you enjoyed our pointless waffling and idiotic Photoshopping, and maybe even some of our non-cock-joke-based stuff too. Here's to 2012's end of year list, and the inevitable victory of The Dark Knight Rises! Hooray!

More:  Top10  Top 20 Movies
Follow us on Twitter @The_Shiznit for more fun features, film reviews and occasional commentary on what the best type of crisps are.
We are using Patreon to cover our hosting fees. So please consider chucking a few digital pennies our way by clicking on this link. Thanks!
« Previous Page