You like lists, right? Especially ones that tell you what to think? Step inside, reader: here's the best TV shows of the year, determined by people vaguely qualified to do so.


Heck of a year for us, 2011. Heck of a year. Largely because some of you now actually have a flipping clue we exist. With the movie-based might of our forefathers TheShiznit.co.uk behind us (ie retweeting us a lot and paying the server costs) we've gone from being a two-bit TV blog to very nearly a three-bit one, but with some new contributors and a new commitment to occasionally watch TV shows before we slag them off, we feel like we've got a proper creative direction and that 2012's looking like a pretty healthy prospect. The support our readers have given us this year on Twitter, Facebook and whatnot (our favourite social network) has made a massive difference to us, so big sloppy thanks to you for it.

And so: a list. This top 20 of 2011's TV highlights was put together with the input of all the regular

writers, with a few special guest appearances from The Shiznit's 'talent' pool. Once we explained to them that TV shows are a bit like movies, only shorter and without Shia Leboeuf in them quite so much, they were all for it. Our thanks to everyone who flung their ill-informed opinions at us like so much dung from an ape's cage. List it up, bitches! 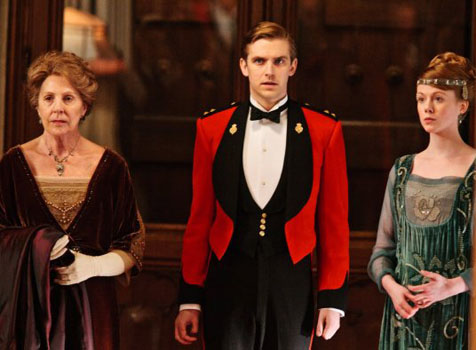 When Julian Fellowes decided to repackage Upstairs, Downstairs for a new generation of idealistic girls and sexually frustrated housewives, even he couldn't have predicted the phenomenal success that would follow. With a recipe that includes class divisions, sexual tensions, social boundaries, glorious scenery and a vague context of historical events, Downton Abbey has become the perfect formula for 'pleasant, quaint television'.

If you've never seen the show, perhaps due to some misguided view that it's a bit girly, then you really are missing out. Basically, there's a rich family who are waited on by poor servants and everyone either wants to shag someone or royally fuck them over, but society won't let them talk about it so instead they have to discuss things like family and furniture. The result is that every episode is like an aggressively charged segment on The Antiques Roadshow. And what's not brilliant about that?

Have to admit though, my ability to take the show seriously is marred somewhat by the fact that the opening credit sequence that begins every week starts, for some reason, with a close-up shot - from behind - of a man walking his dog. That's right, every episode begins with canine anus. I can't help but think about all the respectable people sitting down to watch an award-winning costume drama every Sunday night and simultaneously staring at a dog's balloon knot. Matt

Defining moment: With Lady Mary and Matthew swallowing their feelings for each other for the second year in a row, they have been usurped as Downton's Ross and Rachel by lowly servants Anna and Bates, who finally overcame their own problems and got married. Dawwwww. 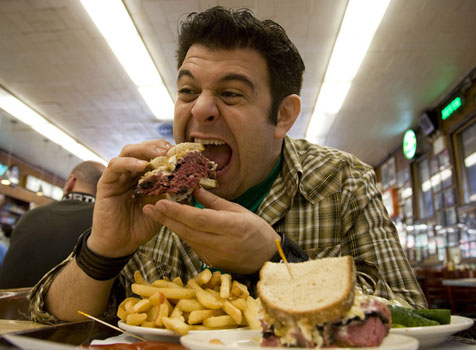 As I may or may not have mentioned before, I don't have a TV. I do, however, have a standing appointment with my boyfriend, fish-finger sandwiches, and a chap called Adam Richman every Sunday morning on Dave.

Adam is the host of Dave's gastronomic celebration Man v. Food, a show that is as simple in its premise and as addictive as Sour Cream and Chive Pringles. It's a potent mixture of cookery show and bizarre Japanese endurance challenge. Each episode sees Adam travel to a university campus or smalltown USA and sample the local 'speciality' dish, such as Connecticut's steamed cheeseburgers (sound revolting, looks revolting, taste sublime). He eats a couple of dishes and chats with the chef/dude who runs the chip van, and talks to the customers about chilli cheese fries.

Then, after the break, the show proper begins. You see, Adam doesn't just try a couple of rib-eye steaks and move swiftly on. Oh no. He upholds Man's dominance at the head of the food chain by undertaking superhuman feats of swallowing. The show isn't called Man Looks at Food. Adam is challenged to beat pre-existing eating challenges at local restaurants in return for T-shirts and ... pride? The challenges range from eating a 7.5lb burger to psychotically hot sushi rolls or 180 oysters. 180 oysters. For a T-shirt.

It should be ridiculous, but it's completely riveting. Richman is charming, funny, dedicated and adored by the locals who cheer him like lunatics when he takes to the plate. And it's impossible not to cheer him on from your couch, mouth full of fish-finger and bean sandwiches. Kirsty 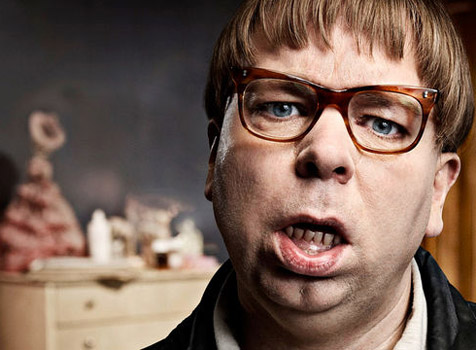 Opening the wounds of the macabre and highly entertaining first series, Psychoville 2 reunited the Ravenhill Psychiatric Hospital survivors under the shadow of a new, even more sinister mystery - and as the title of the show suggests, it was every bit as mental as the ex-residents themselves are. Or were, rather, as League of Gentlemen-ers Reece Shearsmith and Steve Pemberton seemed quite content to kill off their creations with gay abandon.

But for each mysterious death we were rewarded with the introduction of a new character - each fucked up in their own peculiar way - and in true 'League' fashion, each made their own unique contribution to a plot that somehow managed to add a sci-fi aftertaste to a main course already steeped in the dark humour, horror and fantasy we've come to expect from the same twisted minds that came up with Edward and Tubbs.

So it was all change as the more fortunate (or not, depending on your level of sympathy for serial killers and irritable clowns) bumbled their way towards an ambitious finale that would have made Doctor Who shit his pants and go hide in the Dark Ages. I won't spoil that, however - you'll have to watch it yourself. Luke 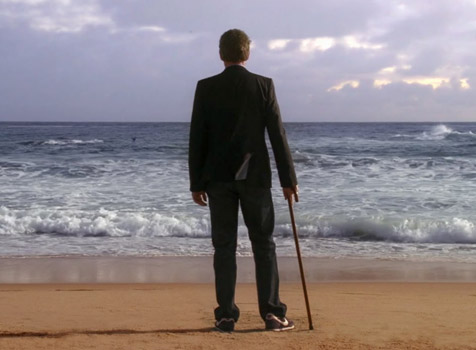 We're not trying to claim that 2011 was a vintage year for House. It spent the year trying to further, then pick up the pieces of, its slightly-unconvincing-but-it-had-to-happen-sooner-or-later House/Cuddy romance, and then rounded off the arc with a season seven finale that, while one of the more 'explosive', seemed out of character.

But there's an admirable quality control on the show that won't let it slip too far. Hugh Laurie's performance still treads just the right line between comic and tragic, and the supporting turns do just what they should, even though you'd expect them to be thoroughly sick of begging for sub-plot scraps by now. The relationship between House and Wilson, in particular, continues to be as funny as it is sometimes touching, mainly because the real affection between the two actors is obvious. It probably makes Stephen Fry jealous.

What was clear from the season eight 'House in jail' premiere was how good these guys are at writing their way out of a corner. Just as Kal Penn's sudden departure made them write in a hasty suicide that brilliantly defibrillated the fifth season's flabby ticker just when it seemed to be flatlining, so the prison episodes freshened things up again. Promoting Foreman to Dean of Medicine after Lisa Edelstein's departure was another negative turned into a positive, taking a character who hadn't done anything interesting for about two seasons and giving him a new role with all types of possible conflict.

A show focusing on one lead character has never been this good for this long, and if, as seems likely, this proves to be the final season, I'm putting it at number one next year even if the finale's an alien abduction, just to pay homage to a great achievement in TV. That's unless there's an episode of Midsomer Murders that turns out to be better. Ed

Defining moment: Recovering from attempting to remove tumours from his own leg in his bathtub, House refuses Wilson's help. "Listen to me: you can't keep going like this," says Wilson. "Something has to change." The response is a lame deflecting joke, but then it gives way to a rare unguarded admission: "I know." 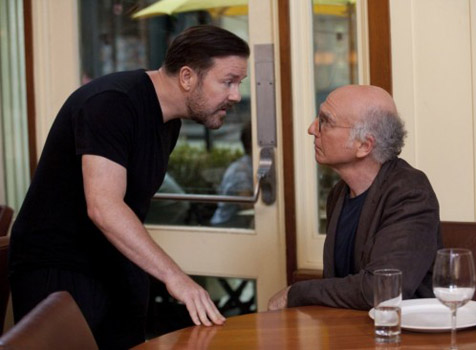 By logic Curb Your Enthusiasm should have ended after season seven. I mean, where could Larry David have gone after taking his career full-circle to the televisual genius of not just one episode, but an entire season based around the prospect of a Seinfeld reunion? Turns out we go back to basics, paring back elements to absolute necessities - but it's where he literally went that may have surprised some. Uprooting any series is usually a warning sign that the show is being shaken up, but David demonstrates time and time again it's what is under the hood that counts, not the chassis or the paint job of a ... comedy ... vehicle ... wow, what a rubbish metaphor.

Social conventions are disassembled with the usual precision, political allegiances redefined in new and interesting ways; David's power to devise an exquisitely detailed plot from the most mundane events and observations remains undiminished. Most shows would kill to get as many story arcs in per season as Curb manages in an episode. The threads are so expertly handled too - all we have to do is sit back and absorb, basking in the guilty pleasure of Leon's quick mouth, Susie's foul mouth, and cameos by the likes of Ricky Gervais, Rosie O'Donnell and an inspired turn by good egg Michael J Fox.

The only question, now it's been proven that your next season need not be bigger than the last, is where does Larry David go from here? Luke

Defining moment: Larry challenges a Japanese restaurant employee over the quality of an apology, after a chance encounter with a group of tourists enlightens him to the possibility it may have been a "shit bow".