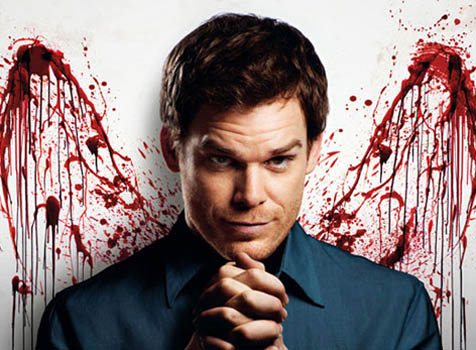 Serial-killing psycho Dexter is clearly guilty of many crimes, and among them is his occasional tendency to fall into tedium. Don't get me wrong, his misdeeds and misadventures still make the show one of the best things on television, but every now and then a Jimmy Smits or a Julia Stiles will make for a less-than-dynamic storyline. Look at the series as a whole, and Dexter's at his best when faced with a gruesome antagonist. And so, with his bloody tableau-depicting murder scenes telling prophecies of Armageddon, season six and the Doomsday Killer returned Dexter to his best form again.

Though not as impactful as John Lithgow's Trinity – which still marks season four as Dexter's best – Doomsday was a much-needed reprieve after Dexter's grief-stricken previous series and Jonny Lee Miller's straight-laced – and pretty ineffectual – bad guy. Marrying Colin Hanks' awkward novice with the brutal slaying of his victims, under the strict tutelage of Edward James Olmos' composed Professor Gellar, this season brought out the best qualities of the show: craziness and cold-bloodedness.

In due course, it gave us a brilliant story twist, alongside the revelation that Deb might actually be in love with her brother and, of course, a cliffhanger ending that made for the show's greatest finale yet. Frankly, every season of every show should end with the viewer thinking: "SHIT! What the fuck is going to happen next?" Even Bargain Hunt. Matt

Defining moment: The last five minutes of the season. A deserved and rewarding discovery that turns the show's basic formula on its head and leaves you begging for more.

Read our Dexter season six review from earlier this year 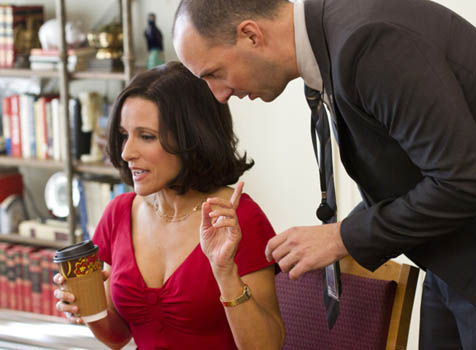 In America, they have a lot of respect for political office. You can show up the failings of the person holding the position, by all means, but the office itself is to be revered. The challenge facing Armando Iannucci, then, on developing a Thick Of It-style show for HBO, was that audiences would reject it. There's one long-standing joke in US politics though, evinced by John Nance Garner, who described his office of Vice-Presidency to Franklin Roosevelt as "not worth a bucket of warm piss".

Seventy or so years on, Iannucci's Veep is on board with the idea, and the swearing too. Julia Louis-Dreyfus is Selina Meyer, a VP with comically little power, reduced to asking her secretary at least once an episode, "Did the President call?" The name of the game is keeping up appearances, and not letting the assembled members of the press see how useless you are, and so this is comedy that makes you squirm as much as laugh. Louis-Dreyfus is perfect for it; the right combination of ineffectual and indignant, and she and all the actors around her grasp the tone and the pace effortlessly. If you're the sort of person who thinks Americans don't understand nuance, understatement or sarcasm, you've just been watching the wrong Americans.

Maybe one day the President will call. Hopefully not for a while though. Ed

Defining moment: Selina turns up to make a speech about oil, corn starch and plastics, to be told by an aide: "The White House doesn't want us mentioning oil, corn starch or plastics." "So what's left here?" she says, going through the amended pages. "I've got 'Hello', and I have ... prepositions." 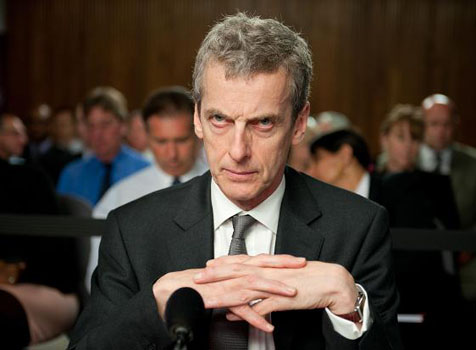 In a year of Levesoning and omnishambling, a new series of The Thick Of It seemed essential. That it was the last one ever was a cause for dismay, of course. The Great British Sitcom has been creaking under the weight of mediocrity so long that I'll take anything as evidence to prop it up: even a single-camera, semi-improvised political comedy with obvious disdain for all its characters.

The idea that you're not supposed to like any of the people you're watching is key to how The Thick Of It works. It frees the writers and actors of the responsibility to tick any traditional comedy boxes. In most sitcoms the lead character has to earn your sympathy or it dies, but here the audience's contempt for its real-life government feeds its feelings for the characters on the screen. Their failings – concern with self-image above ideology; making up policy on the fly to fit public opinion – are the ones we suspect in our own leaders, and here's a chance to ridicule them by proxy. That's why it worked so well, why it was a TV show so very much of its time, and why it'll be so sorely missed. Maybe just do some Christmas specials every once in a while? Ed

Defining moment: Malcolm Tucker gives evidence to the Goodling Inquiry. The man who holds all the cards, able to manipulate everything and everyone, finally is exposed on live television and can't get out of it. One coruscating valedictory speech later, in which he turns the spotlight on a media that backs politicians into a corner, forced to sacrifice ideology for popularity, he mutters: "I'm finished."

More Thick Of It stuff 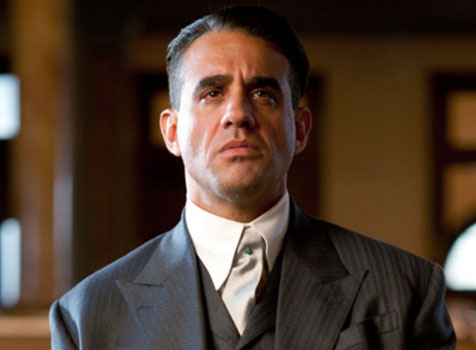 Way to fall from grace, guys. But while Boardwalk Empire's third season certainly hasn't hit the heights of 2011, the 11-place drop from last year's MASSIVELY COVETED number-one spot has more to do with strong competition than with a significant drop in quality.

Yes, we needed more Scouse Capone, and there was too much time between Michael Shannons, but this year the Empire made a move into Dexter territory, with a season based around the specific, recognisable threat of a big, bad villain. Gyp Rosetti set himself up to stymie Nucky's bootlegging operation, leading to tension with Arnold Rothstein in New York. Whether switching suddenly from smooth talk to shocking violence, or getting prostitutes to choke him with a belt during sex, he was dangerously unstable, and spelled trouble right from the start.

More exploration of the politics around the Volstead Act meant a greater sense of the world outside Atlantic City, and of the potential scale of Boardwalk Empire: this isn't just a gangster story about one city; it's about a whole period of American history, and it's only just getting started. Ed

Defining moment: Site favourite and the show's beating heart, Richard Harrow, was treated like shit by Gillian Darmody at the brothel, finding solace with a fellow veteran's daughter and in being a father figure to Jimmy's son. Thought he'd gone soft? No chance: watch him shoot the shit out of Rosetti's men in the season finale in a state of heightened badassery. 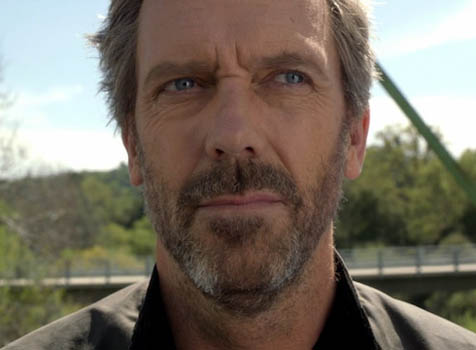 An end-of-year list should be a joyous thing, but it's time to introduce a mournful tone: House is no more. As post-mortems go, though, this is one with party hats and La Bamba blasting out of the speakers. It ended at the right time (ie before it got shit) and it ended in just the right way. Wilson's cancer wasn't totally unexpected; disease is such a constant theme in the show (it's about a hospital, duh) that either House or someone close to him was always going to end up with a death sentence. And since Doctor the Grouch only had one friend, Wilson was high on the list for the business end of the biopsy scalpel.

Where this could've been mawkish, it was touching, and where the end could've played out too hopeful or too sad, it opted instead for cautious optimism: House faked his own death, thinking his way out of the problem as only he could, and rode off into the sunset with Wilson. He maybe gained a little perspective first, on realising through a conversation with a patient – of all things – that maybe his commitment to puzzle-solving above all else was actually doing more harm than good. I mean, jeeze, we were trying to tell you that for eight years, if you'd just listened.

The supporting characters got their deserved endings too: Chase took over the diagnostics department, Foreman carried on as Dean of Medicine, and the forthcoming spin-off show in which Thirteen goes on a death-or-glory lesbian sex spree is developing a pilot episode in my head as we speak. Consistent with the last eight years, House's final season was constantly funny, able to deliver a hefty dramatic punch when it needed to, and far cleverer than anyone ever gave it credit for. Buy the whole-series boxset, watch it, then stick on some porn instead and throw a ball against the wall till you have an epiphany. Ed

Defining moment: On House's couch, Wilson's experimental nuclear-option cancer treatment seems to be failing. Too familiar with the sight of the drip-fed cancer-stricken in hospital, he tells House to let him die there. Having made it through the night, he finds that House hired hookers to pose for photos with his unconscious body in a sombrero.

More:  End-of-year-lists  Arrow  Boardwalk Empire  Breaking Bad  Derren Brown  Dexter  Elementary  Fresh Meat  Friday Night Lights  Girls  Homeland  House  Mad Men  The Newsroom  Peep Show  Person Of Interest  Red Dwarf  Sherlock  The Thick Of It  Veep  The Walk
Follow us on Twitter @The_Shiznit for more fun features, film reviews and occasional commentary on what the best type of crisps are.
We are using Patreon to cover our hosting fees. So please consider chucking a few digital pennies our way by clicking on this link. Thanks!
« Previous Page
Next Page »