In years to come, we will remember 2013 as the year everything changed. Danny Dyer is now in Eastenders, and across the land all else has ceased to matter. But look upon the works of this medium, now so wholly transformed, and you will see more than this. And you might think it handy that some berk put it all in a list and bid you read it.


I do this all for you. And we haven't even met. Putting together this list, I realised I'd watched every episode of a frankly ridiculous number of TV shows this year, some of which didn't even make this list, while also finding time to run through The Sopranos for the third time, and rewatch another couple of seasons of The West Wing. I have, in truth, always watched more or less this much TV, and the opportunity to write about it at least accords it some sort of justification rather than the other way around.

As always, this list contains omissions you might consider glaring. Broadchurch isn't here, because I didn't watch it, and forgot to suggest to Matt that he write it up. Nor is Top of the Lake, Run, Utopia, or The Fall. The Following isn't here because it was fucking awful. Girls isn't here because, while I watched and greatly enjoyed its second season in full, I forgot it existed when I was thinking up the list. This is probably not the assiduous approach likely to lead to a Guardian TV column all that soon.

But look: here they are, all standing in a row. Read them, assimilate the information and tell me what a colossal bell-end I am for not including one. I can take it, or rather my brain won't process it properly anyway, because you aren't a person talking to me on a screen. But know that if I could feel love, I would feel it for you. 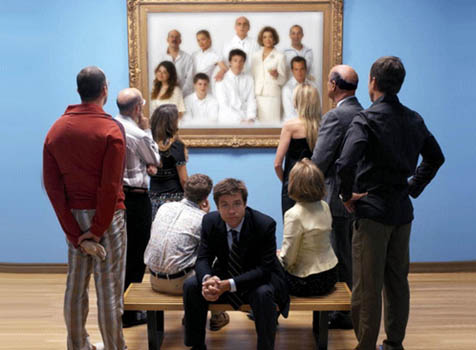 If I had to sum up Arrested Development season four in one word, that word would be "wrong". So very, very wrong. Unfortunately the Johnny Q. Hitler who runs this site has demanded approximately 200 words, so I have to say a little bit more about the unfairly cancelled series that became one of the most highly-anticipated resurrections since Jesus. And lo, much rejoicing was had as each of the cast members were confirmed one by one, and nobody could have predicted what Mitch Hurwitz had in store.

Not content with simply bringing back the Bluths to reel off catchphrases, Hurwitz devised a season of 15 overlapping episodes, each occupying the same space of time and telling pieces of an overall story from the point of view of individual characters. Oh, and the episodes were all available from day one on Netflix so we could watch in whatever order we wanted. And if that sounds like the potential for a hot mess, then ... yeah, it sort of was. But that doesn't mean it wasn't funny, because it was.

Tricky concepts aside, season four proved that there's life in the madcap antics of the Bluths yet, and if we're ever fortunate enough to get a fifth season, I'll be first in line for another 30-day free Netflix trial. Luke 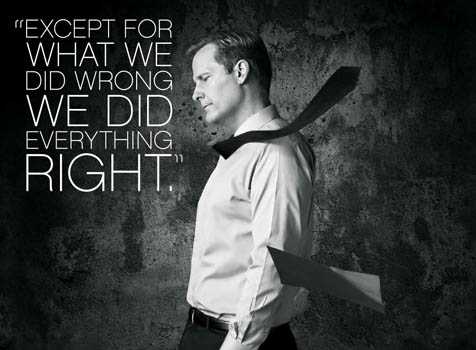 While everyone has their own opinions and some TV shows are suited to certain tastes better than others, I constantly find myself at a loss to understand why every single person doesn't love the absolute shit out of The Newsroom, let alone why many choose to criticise it instead. But then I have to remember one of the main reasons why I enjoy the show: I work in media.

To be clear, I work in a vague arena of editorial related to entertainment media where I get to write about Coronation Street and the Hepatitis C-list celebs that make up the majority of today's reality programmes. But I watch an episode of The Newsroom and I get an unwarranted swell of pride in my work. I walk into my job with my head held high and know, without a shadow of a doubt, that I will only report newsworthy stories, I won't indulge in sensationalist gossip or hearsay and I will conduct my editorial work in line with the highest standard of professional, ethical journalism.

Inevitably, I then sit at my desk and get asked to write a news story about Holly Willoughby's tits, but the fact that the show can seduce me with such delusions is a mark of the power of Aaron Sorkin's writings. Yes, the dialogue can be corny at times, the stirring music can be overwhelming and the convenient plot turns can be emotionally manipulative, but the show is utterly compelling, engaging and entertaining. Not to mention the fact that its fictional take on real-life events still fresh in the audience's mind feels completely original, even if some parts of each episode can seem hackneyed. For what it's worth, The Newsroom is currently my favourite show and I have little-to-no knowledge of American current affairs and politics. That's how good it is. Matt

Defining moment: The second season's big overall story arc: ACN's false reporting of Operation Genoa – complete with doctored footage from a rogue employee – is discovered to be a lie, causing the greatest news scandal in the history of ... well, at least since the start of the show. Last year. 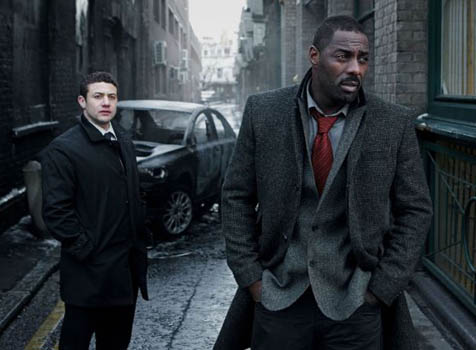 Idris Elba is basically the coolest motherfucker on the planet right now, isn't he? And it's not down to playing Nelson Mandela. Or the Apocalypse-canceller in that robots vs monsters movie. Or the gold-dress-wearing dude in Thor. No, it's all down to this down-and-dirty cop show. And yes, OK, The Wire too, but that's not eligible for this list so I'm pretending it didn't exist in order to make a point.

In a long-standing television tradition of gritty, uncompromising cops, Luther stands as the grittiest and uncompromisingest yet. He's dirty, he's ruthless and he's ever-so-slightly unhinged. He's also, of course, the best detective on the force. But, more so than ever before, this year's third – and final – series looked set to have everything come crashing around him.

We had already seen him let an evil criminal die, plant evidence illegally, pursue deadly revenge on the killer of his ex-wife and continue a pseudo-friendship with murderous sociopath Alice. This time round, Luther tracked down a typically creepy and disturbing serial killer while a small group of do-gooder cops got wise to his dirty methods and tried to gather evidence to get him arrested. Tension built at every turn and Luther always seemed in physical and professional peril, but the series managed to wrap up the case, the danger and Luther's telly career all perfectly. Now we get to look forward to a Luther movie and Idris Elba finally being the coolest motherfucker on the big, as well as the small, screen. Matt

Defining moment: Long-standing and long-suffering partner Ripley spends half of the series struggling with the moral dilemma of betraying Luther's trust and helping to expose his corruption, or sticking by his friend instead. Just as he decides to side with his partner, he is killed, pushing Luther completely over the edge. 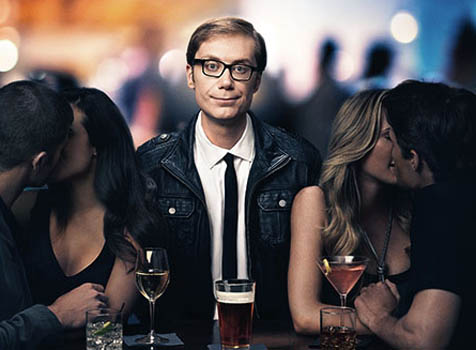 It might not be as well-written, original or clever as The Office or Extras but Stephen Merchant's Hello Ladies – an HBO original series born of a stand-up show – still deserves its place on this list.

Merchant, doing the bumbling-Brit-abroad routine, plays Stuart Pritchard, a successful website developer living in Los Angeles, desperately trying his luck on the Hollywood dating scene. And that pretty much sums up the eight-episode series. The subplot revolving around Stuart's housemate Jessica's acting career does pretty much mirror Extras, and Merchant makes Stuart difficult to root for. But his first attempt at going solo without you-know-who has a particularly naive charm about it. It's as cringeworthy and awkward as you'd expect from a 6'7 bloke from Bristol attempting to impress supermodels with HTML talk, and there's a nice Curb Your Enthusiasm feel to it all. A hymn to the sexually disenfranchised everywhere. Rob

Defining moment: Stuart, getting on well with a girl in a club, offers to buy her a drink, only for her to request an expensive bottle of champagne and announce to all her friends: "The next round's on Stuart!" We've all been there, man. 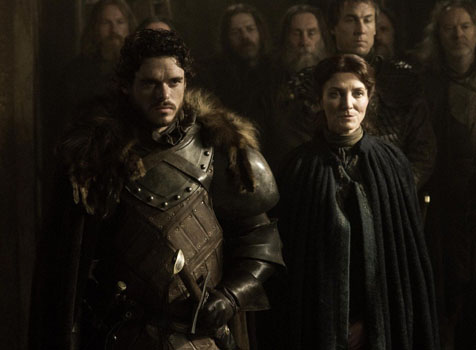 HBO's Game of Thrones continues to achieve the impossible, turning a fantasy show into one of the coolest things on TV, and this year delivering a third season that's been its best, most confident to date. The multiple storylines have focused on the ongoing war for the Iron Throne, as well as increased threats from the various inhabitants north of the wall, and the increasing Messiah-like Daenerys Targaryen from the East.

Despite the epic scale of its story, Game of Thrones never loses focus on the characters. Indeed, it's the small, intimate scenes that are often the most powerful, particularly any scene between Tyrion and Tywin Lannister. Then again, if that doesn't float your boat, there's also dragons, eunuch armies, White Walkers and enough sex and violence to send the Daily Mail into a lather. Iain

Defining moment: Tempting as it is to say any scene with either Daenerys (Emilia Clarke) or Tyrion (the remarkable Peter Dinklage), it has to be the Red Wedding. Game of Thrones likes to deliver its big twists in the penultimate episode of the season, and the shock value of the Red Wedding outdid season one's climax, delivering an unexpected, bloody twist which turned the series on its head.

More:  End-of-year-lists  The Americans  Arrested Development  Boardwalk Empire  Breaking Bad  Doctor Who  Elementary  Fresh Meat  Game Of Thrones  Hannibal  Hello Ladies  Homeland  House Of Cards  Justified  Luther  Mad Men  The Newsroom  Orange Is The New Blac
Follow us on Twitter @The_Shiznit for more fun features, film reviews and occasional commentary on what the best type of crisps are.
We are using Patreon to cover our hosting fees. So please consider chucking a few digital pennies our way by clicking on this link. Thanks!
Next Page »