What even is 'a Danny Boyle movie'?

What does a Danny Boyle movie look like? What does a Danny Boyle movie feel like? Do you know? Does anyone? There is no denying that the director has made some memorable films in his lifetime, hopping from genre to genre and from continent to continent like a gap year student trying to find himself. There's no railroading the brilliance of Trainspotting; precious little shade to throw at Sunshine; Steve Jobs, out now, is as polished and pretty as a freshly unboxed iMac. But can you name another director as high profile and as critically revered as Danny Boyle who so lacks a visible, tangible, recognisable style? He is the invisible man.


At the beginning of his career, Boyle enjoyed playing the chameleon - Drugs dramas! Action comedies! Zombies! Oscar bait! - but now, even hardcore Boylers would have to admit it's likely the director just doesn't imprint on his movies. It's no bad thing to fall back to service your story, and Steve Jobs is a movie that has enough distinctive voices shouting for attention already, but I find it fascinating that Oscar-winning director Danny Boyle still remains an unknown quantity.

This is not necessarily a criticism. Boyle doesn't need a gimmick. Well, he kind of has one if you count the Dutch tilt, but that's hardly unique to him. Boyle likes to lose himself in his stories, stepping back to let the action unfold. Trainspotting already had one authoritative voice in Irvine Welsh; it didn't need a Guy Ritchie-type molesting the camera. Sunshine, The Beach and 28 Days Later all had Alex Garland doing the heavy lifting; the director was but a faithful adapter. 2013's Trance was a movie about identity with no identity of its own.

The only time Danny Boyle really made his presence felt behind the camera was in 127 Hours, where the more energetic shooting style offset the boredom that would have come from watching James Franco cuddling a pebble for a week. It's the only one of his films where you can sense Boyle behaving like a director rather than a storyteller. And it was distracting. Flashiness is not a technique Boyle wears well. 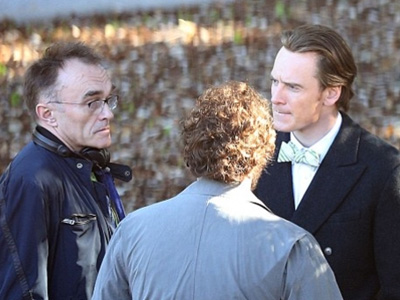 "Hi, I'm this movie's director, Danny Boyle. We have actually met before."


Steve Jobs is another Danny Boyle production where the director's presence is barely felt: screenwriter Aaron Sorkin takes centre stage alongside Michael Fassbender. Few of the glowing reviews of Steve Jobs I have read have made any comments on what, if anything, Boyle brought to the project. Yet inevitably, as with Slumdog Millionaire - another involving story, expertly pitched but blandly told - Boyle will be recognised as one of the industry's finest on next year's awards circuit. The masters of the art - the Spielbergs, the Coens, the Finchers - leave their indelible mark on their movies. I challenge you, Dutch tilt or no Dutch tilt, to pick a Danny Boyle movie out of a lineup.

There's a curious parallel in Steve Jobs between its subject and its creator. Seth Rogen plays Jobs' business partner Steve Wozniak, arguably the talented one of the pair: the man whose programming knowhow led to the Apple II, one of the most successful home computers ever and the foundation on which Apple's current monolithic empire is currently built. Revisiting Steve years later, and upset at his lack of recognition for himself and his fellow team-members, Woz cuts Jobs deep. "What do you do?" he asks. "You can't code, you can't design, you can't take a hammer to a nail... What is it exactly that you do?"

Jobs thinks for an Aaron Sorkin Second before replying: "I play the orchestra." He's referring to his admiration of the maestro of the London Philharmonic, but he may as well be talking about Danny Boyle, the conductor hidden in the orchestra pit, content to let the brass section honk their horns and the percussionists bang their drums.

More:  Danny Boyle  Steve Jobs
Follow us on Twitter @The_Shiznit for more fun features, film reviews and occasional commentary on what the best type of crisps are.
We are using Patreon to cover our hosting fees. So please consider chucking a few digital pennies our way by clicking on this link. Thanks!