The problem with being Mr 'I Don't Believe In Stuntmen' is that voracious audiences just want more danger, more blood, most scenes in which a cast member could feasibly lose an eye or burst a blood vessel. I PAID MY £9.50, CRUISE, I WANT TO SEE YOU SUFFER. Chatter has been buzzing for a while that Cruise and the other Mission: Impossible 6 producers are working on a brand new stunt that's going to make the Danger Zone look like one of those little multicoloured soft play areas you get in family restaurants.

Here's Graham Norton quoting a producer on his show, followed by a video of Cruise trying and failing to curb that shit-eating grin of his.

"
"
"What Tom is doing in this movie I believe will top anything that's come before. It is absolutely unbelievable. He's been training for a year. It's going to be one of the most impressive and unbelievable thing Tom Cruise has ever done in a movie, and he's been working on it right since Rogue Nation came out. It's going to be mindblowing."


Shit. I'm down with this, whatever it is. Say whatever you like about Tom Cruise - HE'S 3 FOOT SIX AND BELIEVES IN ALIEN GHOSTS AND - but I have to give respect to a man so willing to go the extra mile while we graze on popcorn and slide into obesity. What IS this stunt? What could it even BE? Will writing in CAPITALS help find out? It's time to put our special speculation hat on and imagine exactly WHAT it is Tom Cruise is planning.
Going 2 hours 20 minutes without blinking 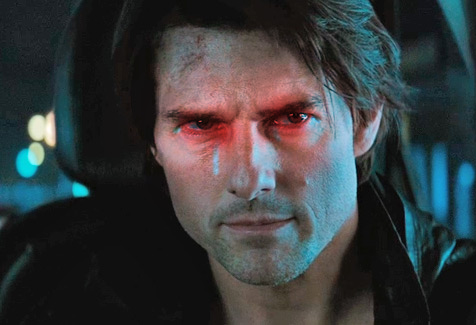 Cruise knows that blinking equals weakness, so for the entire duration of Mission: Impossible 6, he'll not once close his eyes, lubricating them with ocular fluid.
Headbutting the Great Wall of China 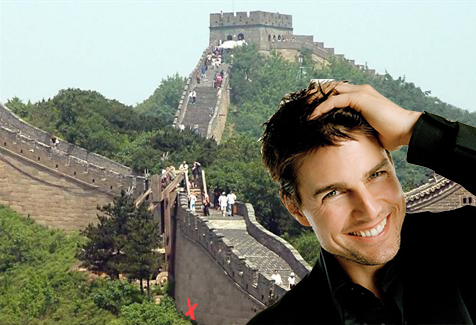 'It won't play great with Chinese audiences,' they said. But Cruise didn't want to know. He was already thinking exactly where he was going to nut it one. Right in the middle.
One of these sweet babies, man that'd be sweet

"What the! Where'd he go?" his enemies would say!
Drinking the sea 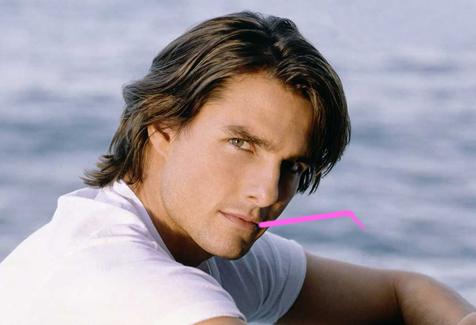 Picture the scene. The villain escapes with the stolen virus by speedboat... but Ethan Hunt has a thirst for justice! He stoops at the beach and plants his face in the water, and starts gulping down the brine, swallowing gulps of ocean until there's nowhere left for crime to hide. He's only gone and drunk the entire fucking sea.
Jumping off a moving train onto a wild horse, then making that horse do a wheelie 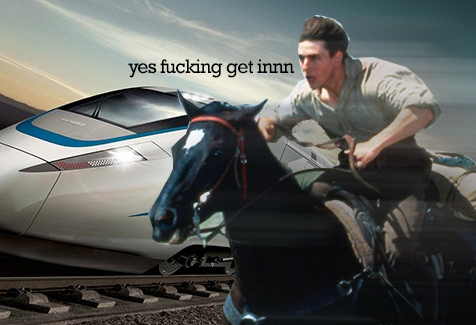 He just needs to find the right kind of horse.
Hanging upside down by his bollocks 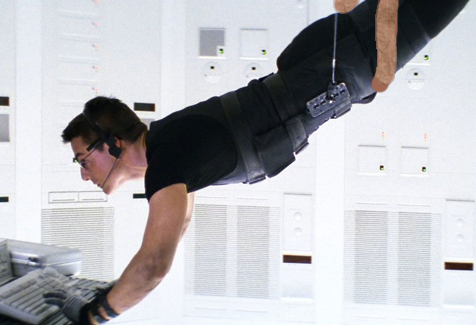 Hence all the training. Maybe Cruise has been adding testicular muscle. His balls have swollen up like meaty coconuts. Visitors to his Bel Air mansion have spoken of their surprise at finding Cruise swinging from his chandelier using just the epidermic tenacity of his nads - it's probably for a film.
Riding Dwayne 'The Rock' Johnson in a sort of buff human rodeo 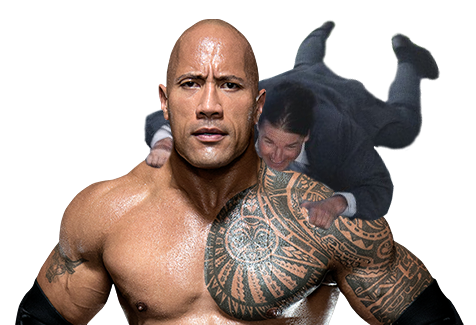 Once he's mounted Dwayne 'The Rock' Johnson, Cruise would have approximately five seconds before the host would begin to reject the rider, thrashing him around like a rag doll. Cruise's best hope would be to grab onto Johnson's shoulder traps and grit his teeth, or whisper positive sentiments regarding Baywatch into his steed's ear, easing his temperament.
A handstand

I'm not going to lie, this would be absolutely amazing.
Levitating, although no one seems to know why

An impressive feat, of that there's no doubt, now Cruise and the film's producers just need to figure out a way to write levitation into the script. Here's a leaked excerpt of the current draft:

ETHAN HUNT
We have exactly 48 hours to track down this virus....
(briefly levitates)
... Or we risk losing 65% of the country's population.


Still needs a bit of fine-tuning.
Running as fast as he can down a really big hill

Cruise reportedly told friends he loves the sensation of his legs giving out from underneath him as he bombs it full pelt down a steep incline, laughing as he does so. That'd be good.
Surfing a wave of turds on a board made of frozen piss, I dunno 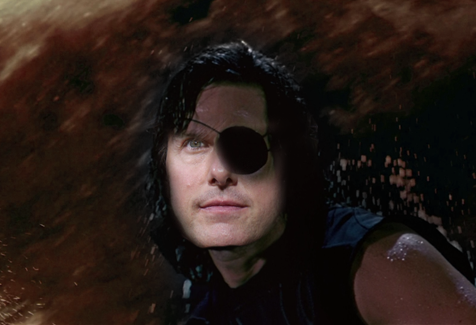 I guess that'd be pretty funny? Cruise navigating an ocean of fecal discharge on a disintegrating flotation device made out of his own frozen urine? I could see that getting a few laughs?
Successfully throwing a half-filled bottle of water in the air so it lands right side up with a satisfying little 'thump'

The budget on this thing is going to spiral out of control.

More:  Tom Cruise  Mission Impossible  Stunt
Follow us on Twitter @The_Shiznit for more fun features, film reviews and occasional commentary on what the best type of crisps are.
We are using Patreon to cover our hosting fees. So please consider chucking a few digital pennies our way by clicking on this link. Thanks!