When can we stop pretending that Dwayne Johnson is an action hero?

At this point in his career, Dwayne Johnson is stuck between The Rock and a hard place. He's already overcome an obstacle that has pinned many a man: a wrestling past that places him squarely in the same category as acting luminaries like Hulk Hogan, 'Rowdy' Roddy Piper and Jesse Ventura. Johnson has more acting talent in his pecs than these grapplers had in their entire bodies, but recently, The Artist Formerly Known As 'The Rock' has accepted roles that don't play up to his strengths - and when I say 'strengths' I'm not referring to his muscles. Dwayne Johnson is not an Action Hero, so can we stop treating him like one?


There was a time when the requirements to be a Hollywood Action Hero included legs the size of tree trunks, a torso the size of a Ford Fiesta and the uncanny ability to be bronzed and shiny at all times. Johnson ticks all of those boxes and more, but that time has passed. The Action Hero of today is more likely to come in the form of a lithe man, a nimble man, an acrobatic man; there is very little call in modern action movies for men who have the grace and manoeuvrability of a Sherman tank. Matt Damon is a modern action hero. Matthew McConaughey is a modern action hero. Even Owen Wilson is occasionally a modern action hero. There's a new benchmark and you don't have to be able to bench your bodyweight to meet it.

Where does this leave men of Dwayne Johnson's stature? Well, there is still a steady, stocky stream of ex-wrestlers dirtying Hollywood's doorstep, but they mostly only bother the direct-to-DVD market - chaps like John Cena and Stone Cold Steve Austin make a living churning out movies where they look angry and slightly embarrassed at the same time. But Dway-Jo deserves better - and we know he's capable of being more than just meat in the room.

This week's new disaster movie San Andreas is a perfect example of how Johnson's talents are being frittered away on unsuitable action hero roles. His part, a helicopter rescue pilot, does not require an actor who is large in stature - in fact, if anything, you'd think that for the pilot of a chopper, who'd have to be fairly flexible when it comes to getting in and around tight spaces, physical bulk would be detrimental. All Johnson does in this movie is fly a helicopter and hunt for his family; rarely is he required to use his strength and size as an asset. This is a part that could have easily been played by, oh, I don't know, Ethan Hawke. You could hardly say the same about The Terminator or Rambo. 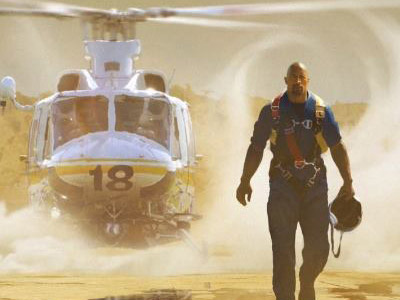 
Arnold Schwarzenegger makes for an interesting comparison with Dwayne Johnson, and not just because he quite literally passed him the baton with his cameo in Welcome To The Jungle. Adopting the mantle of Arnie's Action Hero status hasn't quite worked out as planned, because Johnson's career cannot possibly progress the same way Arnie's did - the action landscape is a very different place. If you look at everything Schwarzenegger did from the 90s onwards, his biggest critical hits were the films that required more from him than just muscle definition. Arnie knew that his unique (read 'questionable') grasp of humour was a more valuable asset than his physique; hence the lasting success of tongue-in-cheek movies like True Lies and Terminator 2 and the straight-faced flops of Eraser, Collateral Damage and End Of Days.

(It's important to note that humour alone is not enough: it's why we won't mention the likes of Junior and Jingle All The Way, apart from this sentence, which can't end quick enough. If you go the other way, all action franchises and no successful comedies, you are Sylvester Stallone. Congratulations. You are now Sylvester Stallone.)

So it is that Dwayne Johnson finds himself in a similar situation to Arnie's. We know he's a man with oodles of charisma (you can't be a breakout star of the WWE by being meek and humble) and we know he can put that charm and wit to good use - movies like Be Cool and The Other Guys showed different sides to a man who suffers from a deplorable excess of personality. His character in Pain & Gain is literally Johnson's manic wrestling persona on steroids. The later Fast & Furious movies are a hoot and Johnson is the best thing in them, not because he's large and in charge, but because he's able to play up to the Action Hero expectations and knowingly overclock the machismo. No one, least of all Johnson, is taking them seriously. 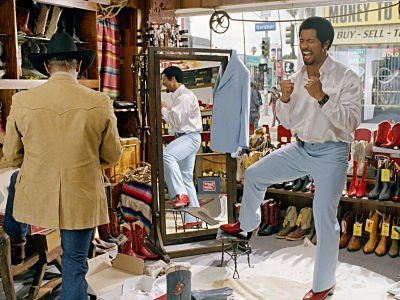 Are you a crunchy almond butter bar, Mr Johnson? Because DAIM.


Even family movies, like San Andreas director Brad Peyton's Journey 2: The Mysterious Island, saw Dwayne Johnson play more than just the tough guy - he's done his stint in family comedies like musclemen before him (Hogan in Mr Nanny, Diesel in The Pacifier, Triple H in The Chaperone) but unlike those lunkheads, he didn't look so uncomfortable he wanted to clothes line the casting agent out the window. Johnson can do it all: action, comedy, family, even drama - Southland Tales is a big box of bonkers, but Johnson's presence at the swirling centre of the madness is magnetic and compelling, even moving at times.

But when you see Johnson in roles like Brett Ratner's Hercules, shit-sack sequel G.I. Joe: Retaliation and crumbling wreck San Andreas, your heart sinks. Dwayne Johnson transcends the old, shitty action hero archetype, but he is drawn to these roles like a massive, buff moth to a flame. He tries to play ordinary guys too, like in Snitch, but his hulking frame means you might as well hire Godzilla. He's like ten kids all hiding beneath a trenchcoat. Johnson is cursed by his godlike appearance but gifted with the kind of acting chops that men half his size would kill for.

While writing this piece, Ed checked in and came up with the perfect analogy: "[Dwayne Johnson] is the cinematic equivalent of Peter Crouch, whose key strength is assumed to be heading because he's tall, so everyone belts long balls up to him the whole time, whereas actually he's better with his feet." To Ed's credit, I can't think of a more succinct way to describe his problem.

Now the positives: San Andreas is Dwayne Johnson's worst movie to date, so the only way is up. It seems perverse that he's not been in a superhero movie yet - even Mickey Rourke has been in a superhero movie, Dwayne - but the costumed genre could be a good fit for Johnson's skill-set. He's big, he's funny, he knows how to deliver terrible dialogue and make it sound like he's in on the joke. It's a shame he's playing the villain, really; the role of Black Adam in Shazam! (exclamation mark the movie's own) sounds way more interesting than the hero, no matter which poor schlub DC hire to stand in Johnson's shadow.

More:  Dwayne Johnson  San Andreas
Follow us on Twitter @The_Shiznit for more fun features, film reviews and occasional commentary on what the best type of crisps are.
We are using Patreon to cover our hosting fees. So please consider chucking a few digital pennies our way by clicking on this link. Thanks!