Why Gnomeo & Juliet is this season's most decorated animation

At first glance, Gnomeo & Juliet seems like just another cheap-as-chips childrens' animation, complete with a star-studded list of voiceovers. But what's this? Look closer. That's prestige, my friend.


Gnomeo & Juliet, out this Friday, is the story of Romeo & Juliet retold with garden gnomes (if the title hadn't already made that abundantly clear), which on reflection is probably how Shakespeare would have written it if he'd pulled his shit together. Yes, it looks like just another non-Pixar toon that you'd duck into a DreamWorks movie to avoid, but it has one thing going for it: an absolutely mental voice cast. Behold. 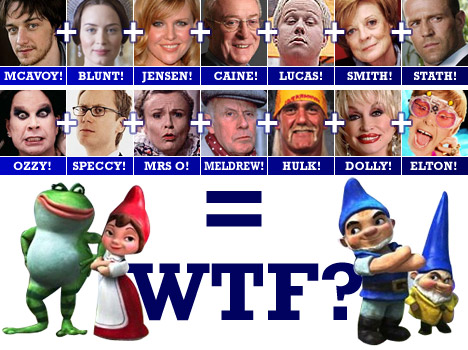 Finally, Elton John and Jason Statham get a chance to work with one another! Gnomeo & Juliet's roster reads like the ravings of a lunatic - the kind of nonsensical scribblings you'd find written in blood at a murder scene. It's so bizarre it could burst your mind. Ozzy Osborne biting the head off Maggie Smith? Michael Caine and Hulk Hogan, bro'ing out in the voiceover booth? Entirely possible.

While it may seem like the producers have drawn voice talent from Lottery Machine A (Guinevere), each cast member brings success from their own chosen field. Caine and Julie Walters bring the Oscars; Dolly and Elton provide the Grammys. Matt Lucas brought the bean dip. Just get a load of the awards that Gnomeo & Juliet's illustrious cast have to their name.
1 x Knighthood 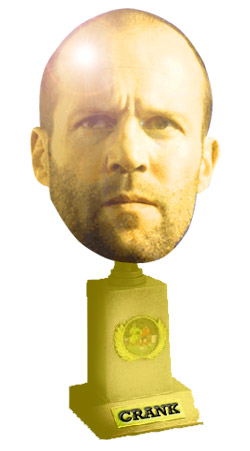 Now that's pedigree to be proud of. Read it and weep, Pixar. Or should we say Pricks-ar.

More:  Gnomeo Juliet  WTF
Follow us on Twitter @The_Shiznit for more fun features, film reviews and occasional commentary on what the best type of crisps are.
We are using Patreon to cover our hosting fees. So please consider chucking a few digital pennies our way by clicking on this link. Thanks!