Why I won't sign the 'Bring Back Ripper Street' petition

Try to avoid publicly soiling yourself with anticipation, but the LittleBigPicture Top 20 TV shows of 2013 list is being prepared even as you read this. And spoiler alert: it struck me when I read down the list after finalising it this week that there's a whole lot of American TV in there, and not all that much from the UK. But maybe the BBC's recent cancellation of Ripper Street, a shame though it is, is a step in the right direction towards redressing that balance.


For you to take that statement seriously requires acceptance of the idea that our end-of-year top 20 lists are such a vital cultural touchstone that they serve as an irrefutable barometer of televisual quality. And I think we can all agree that that's the case. But if British TV shows are to start making up even half of the list, its commissioners have to start getting brutal.

Ripper Street's early demise came as a shock for a reason: we don't cancel things much over here. It seems a bit rude, in a way; a little un-British. Come along, they've really tried their best: hardly seems cricket to take it away from them, what? Besides, they're already there, and it'll take a lot of work to put something else in their place, when we could be having scones.

No, in the UK, we let shows run and run, often irrespective of quality, and look what we have: a good sitcom about once every five years, a handful of truly excellent dramas, most of them limited to brief tentpole runs every other Christmas rather than fleshed out into proper series, and acres upon acres of mediocrity. Sitcoms and panel shows run for decades, long past the point at which they ran out of ideas. Insipid dramas like Waterloo Road and Heartbeat get renewed year after year because it's easier than developing something new. 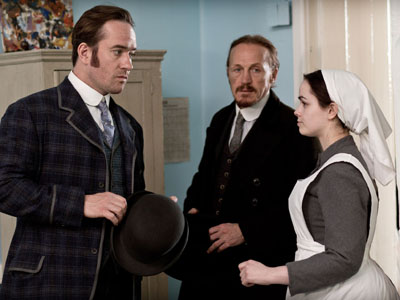 "I'm sorry, Inspector. We did all we could."


Imagine a forest fire: that's the American approach to TV commissioning. A forest fire is brutal, unforgiving - but good for the forest's long-term ecology, because it encourages new growth. If a show's not working, it goes, quick and unfussy, round the back of the woodshed with a twelve-bore to the temple. And this works: the results are there for all to see. US television's a glorious creative playground, where everyone, even the best of Hollywood, wants to be.

Inevitably, there are undeserving casualties. Arrested Development, Firefly, Deadwood: all of these met an end too soon for a lot of fans. But I believe they laid down their lives for a deserving cause. And don't forget, the vast majority of the cancelled shows merited it: who cries for The Playboy Club, or the Only Fools and Horses remake? The end of Ripper Street (which I thought an uncommonly good BBC drama, by the way) is provoking a furious reaction in some quarters, and I agree that it didn't deserve to go, when there's other BBC drama that merits the chop far more. But ultimately, a more cut-throat approach might yield long-term results.

I must also disagree, all-round splendid chap though he is, with Den of Geek's Simon Brew on this. He argues in his excellent article on the Ripper Street cancellation that "the BBC is a public service broadcaster, funded by the licence fee, and thus doesn't have the same requirement to chase ratings". But it seems to me that ratings are a vital indicator of whether the BBC's diverting its funds correctly; in short, if not enough people are watching, it has to at least consider pulling the plug. No, ratings shouldn't be the only factor. But a public service broadcaster can't just ignore them. Quite the opposite; it has a responsibility to take them into account.

The petition started at change.org to reverse the BBC's decision is a worthy one, and believe me, I love to see people who care about TV trying to effect change for the better. But I won't sign it, because while I don't think Ripper Street deserved its fate, I do think we could all benefit, ultimately, from a little more ruthlessness.

More:  Ripper Street  BBC
Follow us on Twitter @The_Shiznit for more fun features, film reviews and occasional commentary on what the best type of crisps are.
We are using Patreon to cover our hosting fees. So please consider chucking a few digital pennies our way by clicking on this link. Thanks!