Why vampires should bite, not suck

Teen girls suck. There, I said it. And I don't mean in the "verify your credit card to access" internet specialist site way that makes you feel vaguely dirty and seedy even if you are researching a book or something.

Teen girls are responsible for the decline in Western Civilisation. You can thank them for X Factor Christmas number ones, Hello Kitty merchandise, soap operas, uncomfortable misunderstandings on Facebook and any other number of mindless faddy bullshit trends that plague anybody who has passed through puberty and isn't filled to the brim with pocket money and oestrogen.

Which is all well and good, I get that some things are not meant to be appreciated and understood by adults, males or anybody who doesn't need to validate their sense of self with trinkets and baubles from Superdrug. Of late, however, there is a trend that I am not prepared to accept. I draw the line in the sand here and say with arms folded across chest, "No more. Nuh-uh. You shall not pass!"

I vant to suck your blood
Vampires were cool once. Not as cool as werewolves or zombies, but they were still pretty awesome. You knew where you stood with vampires. They mooched about at night, sometimes in gangs, and fed upon the weak and willing.

Sometimes they changed into winged monsters, sometimes they just leered from over a caped arm (Christopher Lee has the best evil smile ever) at nubile buxom wenches in nighties who threw their hand over their mouth and backed into castle walls shaking their heads in terror.

There were deviations from the traditional vampire lore in films like Near Dark, Fright Night and others that I can't be bothered to IMDB right now, but all in all, vampires were nasty, brutal creatures who existed for one reason: To drink your blood.

And we were happy with that, we liked that these suave monsters of the night knew their place and abided by the rules. Vampires are scary, soulless pursuers of virginity and blood. A bit like Gary Glitter but with less evil-wizard beard. 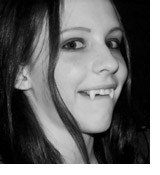 But then something changed. Vampires became the domain of angst-ridden, picked-on-at-school goth girls who sought solace in the idea of the tortured eternal spirit of the vampire.

Instead of brutish demons, vampires became blog-writing miserable wankers who felt the pain and loneliness of living for eternity blah blah blah. Vampires stopped enjoying being vampires and brooded about acting like fat goth girls who kept diaries and made a point of telling you they were Wiccan even though you never fucking asked.

Self-harming Martha Dumptrucks who, instead of listening to The Smiths and drinking cider over the local park like miserable teens have done since time began, decided to seek refuge in shitty-written vampire novels and douse themselves in patchouli oil.

It has reached the point in 2009 where we have the Twilight movies, which offer us emo-vampires that sparkle and are vegetarian. I'll let you read that again. Vegetarian Vampires. That sparkle in sunlight.

More:  Vampires  Twilight New Moon
Follow us on Twitter @The_Shiznit for more fun features, film reviews and occasional commentary on what the best type of crisps are.
We are using Patreon to cover our hosting fees. So please consider chucking a few digital pennies our way by clicking on this link. Thanks!
Next Page »