You Ain't Seen Me, Right? is brought to you by Daniel Palmer, of Part-Time Infidel web fame. If IMDB had a face, limbs and working organs it would be grotesque, so luckily we have Daniel instead. 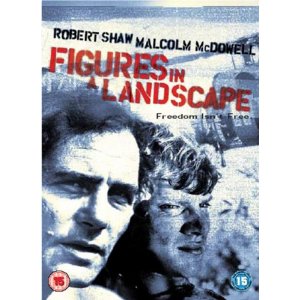 On being blacklisted, American director Joseph Losey decamped to Britain, where he reinvented himself as an auteur of renown. At a time when British cinema was undergoing a marked shift, Losey made a string of critically lauded and artistically rewarding films - most notably with Harold Pinter on The Servant (1963), Accident (1967) and The Go-Between (1970) - which displayed a hitherto untapped level of aesthetic audacity.

Figures in a Landscape charts the progress of two men, MacConnachie (Robert Shaw) and Ansell (Malcolm McDowell), who are fleeing from a pursuing helicopter across a landscape that, beyond scattered villages and the occasional shepherd, is devoid of human life. Though its premise is simple and its plot sparse, this oblique, elliptical work addresses many of Losey's frustrations at the time, and features some first-rate acting. 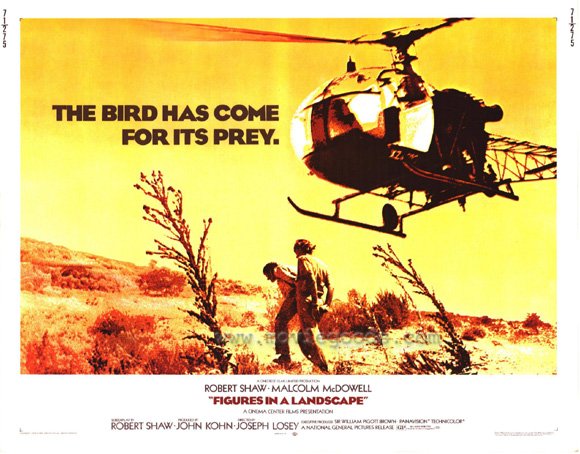 Much like Nicolas Roeg in his survival classic Walkabout, released a year later, Losey employs the endless, blank vista as an active participant in the narrative arc, a beautiful yet forbidding player who constantly throws obstacles in the characters' paths. Another film from 1971, Spielberg's debut feature Duel, is also brought to mind, in that the characters are pursued by an implacable mechanical foe. Losey's spry direction underlines the characters' isolation to great effect, with its array of careening cranes, breathless tracks and ominous long shots. The stillness of the landscape is juxtaposed with the suspenseful score which greets the arrival of the helicopter, courtesy of Richard Rodney Bennett - prolonged bouts of silence and sudden bursts of sound are used throughout to ratchet up the tension.

The crux of Figures in a Landscape is the interplay between Shaw and McDowell, whose characters are polar opposites in almost every regard. MacConnachie is an irascible, embittered family man who resents the opportunities afforded the sybaritic, cosseted Ansell. This cultural, generational battle is played out in the opening act, but both undergo a profound change as they learn to see past their immediate differences and work together. They converge on a shared identity, with Ansell's self-preservation instinct kicking in and MacConnachie's latent compassion coming to the fore. Shaw, who also penned the screenplay, shows a range far beyond his best remembered roles - though, ironically, his obsession with downing the helicopter presages Sam Quint in Jaws. Fresh from his breakout role in Lindsay Anderson's If..., MacDowell was at the height of his popularity here and exudes the same youthful vigour that would characterize his career-defining role in A Clockwork Orange.

The subtext of Losey's work at this juncture isn't hard to decipher, dealing as it does with victims of circumstance or social convention. It isn't much of an extrapolation to say that Losey chose material in order to deal with his own victimisation at the hands of HUAC. To me, the relentless black helicopter represents a set of moral or political precepts that forbids any deviation. But its Pinteresque ambiguity is such that it permits us to expound our own theories and urges us to create our own exposition.
Hungry for more genuinely enlightening film knowledge? There'll be another You Ain't Seen Me, Right? next Friday.

More:  You Aint Seen Me Right  Figures In A Landscape  Robert Shaw  Malcolm McDowell
Follow us on Twitter @The_Shiznit for more fun features, film reviews and occasional commentary on what the best type of crisps are.
We are using Patreon to cover our hosting fees. So please consider chucking a few digital pennies our way by clicking on this link. Thanks!