Welcome to another edition of You Ain't Seen Me, Right?, the film boff feature that has more big words in it that I don't understand than the Klingon Dictionary. So many vowel sounds!

You Ain't Seen Me, Right? is brought to you by Daniel Palmer, of Part-Time Infidel web fame. The most films he has ever seen in one day is 153. Don't ask how, he just found a way.


Slaughterhouse-Five (1972)
Buy the DVD on Amazon 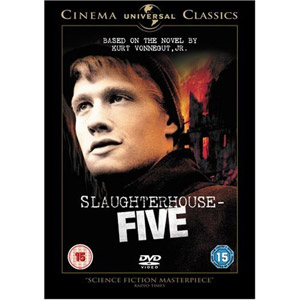 George Roy Hill was a stern taskmaster who had no truck with indulging the whims of stars; a pilot during World War II and the Korean War, Hill brought a similar intensity and focus to his direction; very much subscribing to the old school approach of keeping outside interference to a minimum. Sandwiched between his two mega-hits with the Redford/Newman pairing - Butch Cassidy And The Sundance Kid (1969) and The Sting (1973) - is this adaptation of Kurt Vonnegut's seminal surrealist Sci-Fi satire. Slaughterhouse-Five was a novel few thought could be brought to the screen, yet unlike many authors, Vonnegut was delighted with the result.

Vonnegut set out to write a sober account of his experiences in Dresden during World War II, but as he progressed he found it impossible to convey the horror of what he witnessed without recourse to gallows humour. Slaughterhouse-Five is the culmination of that process; telling the story of Billy Pilgrim (Michael Sacks), a man who has become 'unstuck in time'. The major events from Billy’s life are shown in random order, the narrative jumping between timeframes, recollections sparked by objects or similar occurrences; from his time as a prisoner of war to his abduction by the inhabitants of a planet called Tralfamadore, housed within a giant pod that resembles a sitcom set for the amusement of an audience of notable Tralfamadorians. 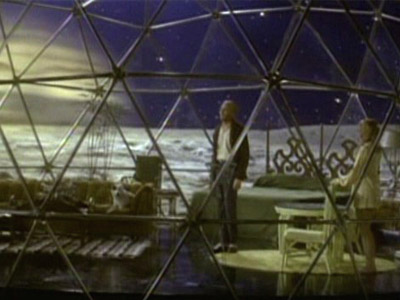 Send your funny caption in a stamped-addressed envelope.

Great works of literature rarely make great films because they are all too often reduced to their most basic elements, losing much of the nuance that made them so powerful in the first place: it's no coincidence that some of the greatest films ever made derive from trash. Slaughterhouse-Five succeeds where so many adaptations fail because it retains the spirit of the source material and emulates the voice of the author. Without Vonnegut's transcendent prose to propel the narrative, Hill fashions a visual rendering of its whimsical, tragicomic tone; his gift for articulating the grandeur of landscapes combined with Miroslav Ondricek’s lambent, ethereal photography and Stephen Geller's efficacious screenplay to convey Billy’s fractured mindset.

Sacks does a wonderful job of embodying Billy’s guileless enthusiasm and amiable curiosity, and the growing detachment of his older self, adapting his voice and posture to the character’s advancing years; it is a brilliantly judged performance that manages to encompass a myriad of emotions. Ron Liebman and Eugene Roche provide effective support as fellow POWs Paul Lazzaro and Edgar Derby, the camp's antagonist and father figure; and Valerie Perrine is a winsome presence as Montana, the actress who joins Billy on Tralfamadore in order to mate.

Many of Vonnegut's conceptual preoccupations remain intact here, balancing pathos and levity in its cogitations on determinism. The film, like the novel, hypothesizes that time, though we experience it subjectively as a linear process, is occurring simultaneously; that causality is a fixed phenomenon with no beginning, middle or end. Vonnegut dissected the human condition with wry amusement; and though he was uniquely attuned to the inherent absurdity of our predicament, he never lost his humanity, detailing our hubris with an acuity borne of empathy.
Were you paying attention? Because it sounded a lot like you were playing Fruit Ninja on your iPhone. Hmm. More from You Ain't Seen Me, Right? next week.