Do you like films? Like, ones without robots in them? Yeah, they have them, believe it or not. If you're looking to expand your horizons and become a full-time cine-nerd, look no further.

You Ain't Seen Me, Right? is brought to you by Daniel Palmer, of Part-Time Infidel web fame. He's far more talented than any of us bums. 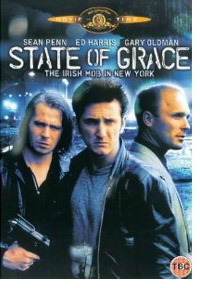 Phil Joanou's stylish thriller failed to find an audience on its release, due in large part to the fact that it coincided with a film called Goodfellas. Ironically, State Of Grace deals with a subject that would be explored by Scorsese sixteen years later to great acclaim - the machinations of the Irish Mob.

Terry Noonan (Sean Penn) returns to New York's Hell's Kitchen after a decade away. He finds his old neighbourhood a drastically different place, undergoing a tumultuous process of gentrification. Terry meets up with his childhood friend Jackie Flannery (Gary Oldman), the louche, volatile brother of Mob kingpin Frankie (Ed Harris). Terry is also reacquainted with his childhood sweetheart; Jackie and Frankie's sister Kathleen (Robin Wright). Terry begins to work for Frankie, but it soon becomes apparent that his loyalties are divided between the world he grew up in and the demands of his new life.

New York's seamy mis-en-scene is brought to life by Jordan Cronenweth's sombre photography; adroitly capturing the steam extruding from manholes, flaming trash cans, rain-soaked streets, shady alleys, crumbling tenements and smoky bars. Ennio Morricone delivers a characteristically opulent score, its lush orchestrations lending emotional weight to Joanou's careening cranes and sweeping tracks - In much the same way it did in Once Upon A Time In America. 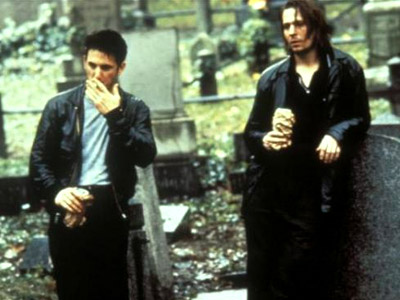 The film is teeming with first-rate performances. Penn expertly conveys Terry's conflicting emotions, exhibiting the moody physicality that is his metier. Oldman immerses himself in the role of the wayward underachiever forever in his brother's shadow, burying his disappointment in the rush of mayhem and a haze of alcohol. This man's versatility knows no bounds; he almost steals the film from under Penn's nose. Harris provides a master class in menace as the Machiavellian social climber who typifies the new pragmatism.

Frankie yearns to be taken seriously, and is willing to lay aside the historic tensions between the Irish and Italian communities to do so; subordinating friendship and family ties to personal advancement. Wright is effective as Kathleen, a woman torn between family loyalty and her feelings for Terry. She and Penn have genuine chemistry in their scenes together - hardly surprising, given that they would become an item shortly hereafter.

State Of Grace is an elegy to a dying epoch, a tribute to a city in the throes of transition. Jackie embodies the wild, wilful side of the city that President Ford told to 'drop dead' in the '70s. Frankie represents those striving to sweep away the squalor in a tide of homogeneity; and the double standard at the heart of that expedient.

State Of Grace was as out of keeping with the '90s as some of its characters; its earnestness was antithetical to the irony that was de rigueur throughout the decade. It has a street-level realism in the manner of Dassin or Lumet, coupled with the almost balletic grandeur of Peckinpah or Leone. By rights this gripping, hard-bitten crime saga should be regarded as one of the better examples of modern noir.
That's your lot. I feel smarter already. Let's go and get drunk. More from You Ain't Seen Me, Right? next Friday.

More:  You Aint Seen Me Right  State Of Grace  Sean Penn  Ed Harris  Rip Torn
Follow us on Twitter @The_Shiznit for more fun features, film reviews and occasional commentary on what the best type of crisps are.
We are using Patreon to cover our hosting fees. So please consider chucking a few digital pennies our way by clicking on this link. Thanks!