Here's another instalment of our hidden gems feature, You Ain't Seen Me, Right? - the weekly blog post which naturally assumes you have no taste. (*snort*)

You Ain't Seen Me, Right? is brought to you by Daniel Palmer, of Part-Time Infidel web fame. Let 'em have it, Daniel. 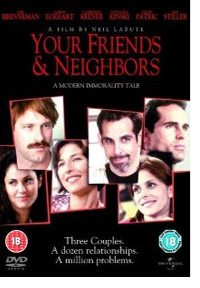 Neil LaBute has offended as many people as he has entertained, which is no doubt just the way he likes it. Before he set about desecrating a British horror classic - his remake of The Wicker Man is frightening for all the wrong reasons - LaBute was a purveyor of pitch-black comedy.

Your Friends And Neighbors is the follow-up to his 1997 debut In The Company Of Men; a barbed look at lust, greed and ambition which garnered praise for its frankness but drew criticism for its misogyny. Your Friends And Neighbors takes an equally caustic view of human relationships, charting the dalliances of a group of young professionals in a manner not unlike a misanthropic Woody Allen film.

Jerry (Ben Stiller) is a pompous college professor who lives with Terri (Catherine Keener), a jaded advertising copywriter whose creative aspirations have been put on hold. Jerry is friends with Barry (Aaron Eckhart), a self-satisfied corporate executive who considers himself the best sexual partner he has ever had, and Cary (Jason Patric), a conceited doctor with no regard for the feelings of others.

Barry's marriage to Mary (Amy Brenneman), an unassuming journalist, is under considerable strain. Amy feels stifled by Barry's condescension and constant demands for sex, and is so flattered when Jerry propositions her that she decides to take him up on his offer. At the same time, Terri begins an affair with Cheri (Nastassja Kinski), an artist's assistant whom she encounters at a gallery.

LaBute's contempt for this tangled web of infidelity could not be better illustrated by his decision to shoot the majority of what transpires from a distance; only diverging from medium and long shots when his subjects are at their most uncomfortable, as if he can only bear to venture closer when he is exposing their peccadilloes. 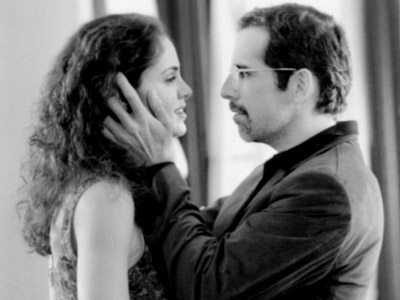 "Kissing me won't bring back your goddamn honey"

Patric is a revelation as the sociopathic braggart Cary, erasing all memory of Speed 2 in his portrayal of a sexual predator whose coldness is chilling to behold. Keener brings a suitable air of resignation to Terri; the quarrelsome exchanges between her and windbag Jerry have an authenticity that is both engrossing and discomfiting. Brenneman is arresting as the discontented Mary, her compunction providing the film's emotional core. Eckhart deftly conveys the vulnerability at the centre of Barry's macho veneer, torn between his need for approval and the desire to salve his conscience.

It could be argued that LaBute's early films prefigure the 'comedy of embarrassment' that flourished in the early 2000s; placing disagreeable characters at odds with the illogical precepts of social convention, remaining cringe-worthy yet grimly compelling. LaBute rails against the modern obsession with grading and quantifying feelings; he challenges the belief that there is such a thing as uncomplicated, consequence-free sex.

Love him or hate him, LaBute's clarity of vision is indisputable. He is not afraid to alienate the audience, holding a mirror up to their conceits and refuses to offer them a neat resolution. In LaBute's world, life goes on and we live with our choices.
Hope you enjoyed that, folks; be sure to hunt it down on DVD if you can. More from You Ain't Seen Me, Right? next Friday.

More:  You Aint Seen Me Right  Ben Stiller  Neil LaBute  Aaron Eckhart  Catherine Keener  Jason Patric
Follow us on Twitter @The_Shiznit for more fun features, film reviews and occasional commentary on what the best type of crisps are.
We are using Patreon to cover our hosting fees. So please consider chucking a few digital pennies our way by clicking on this link. Thanks!