Hey, why don’t you put away that copy of Jeepers Creepers 2 and watch something worthwhile instead? You Ain’t Seen Me, Right? is the weekly fascist feature that outright tells you what’s good for you.

You Ain't Seen Me, Right? is brought to you by Daniel Palmer, of Part-Time Infidel web fame. He is completely CGI. 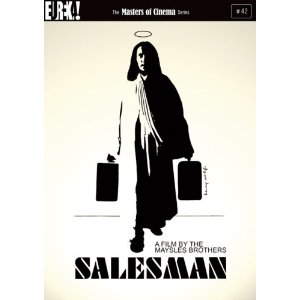 The Maysles brothers were witnesses to history; they filmed the Beatles’ first visit to America in 1964 and the tragedy at Altamont in Gimme Shelter (1970); two landmark moments that bookended the 1960s paradigm. Albert Maysles also acted as cinematographer on Robert Drew’s intimate, revealing account of the 1960 Democratic primary, Primary (1960) - alongside fellow Verité innovator D.A. Pennebaker. The brothers are best known for the cult classic Grey Gardens (1975), about the eccentric aunt and cousin of Jacqueline Kennedy living in seclusion together in a dilapidated East Hampton mansion. The Maysles revolutionised the form, virtually inventing the medium as we know it today; they were the first to make feature-length documentaries for theatres that presented people on the fringes of society.

Shot over six weeks, Salesman follows four door-to-door Bible salesmen - Paul ‘The Badger’ Brennan, James ‘The Rabbit’ Baker, Charles ‘The Gipper’ McDevitt and Raymond ‘The Bull’ Martos - as they travel from Boston to Florida, via a sales conference in Chicago. Driven by their pitiless superiors, the salesmen relentlessly strive to shift ever higher quantities of their incongruously ornate product to the low-income Catholic households they visit.

The Maysles’ credo was to put faith in reality, to just start filming and allow events to unfold; to humanise their subjects and place them within common human experience. Though it is shot with sober detachment and presents a potentially dry subject matter, Salesman is fraught with drama. The crew never impinges as the salesmen walk into domestic battlegrounds armed only with slick patter and a well-rehearsed sales pitch. 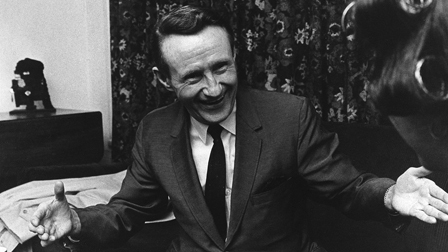 My sales pitch is this big.

While the initial instinct is to view their manipulative tactics as despicable, the Maysles succeed in underlining the forces guiding the salesmen; namely the conflation of organised religion and capitalist practices, employing modern business techniques to market their faith. The Bible is sold not as a spiritual text, but “the bestseller in the world”.

The Maysles discovered a subject as fascinatingly complex as the Beales of Grey Gardens in Paul. Part Shelley Levene, part Willy Loman; the lonely, peripatetic life of the salesman has taken its toll on Paul: his psyche slowly crumbling, his tenacity and ardour waning; dread, panic and dejection flashing across his face, masking his misgivings with weary jocularity. There is a conspicuous lack of piety amongst the salesmen, who view the Bible as a hot commodity through which they can meet their obligations: they could be selling anything.

The rest of the group are hopelessly inured to the lifestyle, wrapped up in the petty rivalries and blinded by the bold projections; the scenes in which they strong-arm people on the brink of financial ruin into investing in what amounts to salvation insurance are excruciatingly compelling. There are some felicitous bursts of diegetic music, from Muzak versions of ‘Yesterday’ and ‘This Land Is Your Land’ to Paul’s mantra of ‘If I Were a Rich Man’.

In the age of multi-million-dollar tax-exempt religious empires, Salesman has a prophetic feel; offering an insight into the genesis of a world populated by people with titles like ‘Theological Consultant’. As the salesmen are tersely informed: “Money is being made in the Bible business; those that aren’t making money, it’s their fault.”
So those dick-clowns that come round and knock on my door trying to sell me something have a point of view? Wow. Learn more from You Ain't Seen Me, Right? next week.