Straight from the annals of cinema history, You Ain’t Seen Me, Right? presents yet another obscure film triumph. If you laughed at the first part of that sentence, this probably isn’t for you.

You Ain't Seen Me, Right? is brought to you by Daniel Palmer, of Part-Time Infidel web fame. His name was the cryptic last words that Orson Welles spoke on his deathbed. 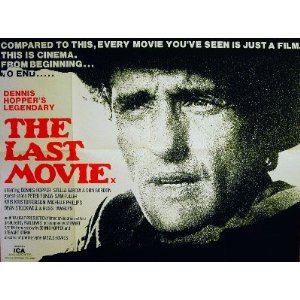 After Easy Rider (1969) became a cultural phenomenon, Dennis Hopper took advantage of his new standing and set off for the wilds of Peru to create a film that had been germinating in his mind since the early ‘60s. Despite winning the Critics Prize at the Venice Film Festival, Universal was bemused by the end result - indeed, one famous story goes that following a screening for studio execs the projectionist broke the tense silence by saying: ‘They named this movie right, because this is gonna be the last movie this guy ever makes!’. The Last Movie has become infamous as the film that brought Hopper’s directorial career to a juddering halt - he didn’t direct again until Out of the Blue (1980) - and precipitated a descent into drug and alcohol abuse from which he barely escaped.

Kansas (Hopper) is a burnt-out stunt co-ordinator working on a generic Western shoot-‘em-up in a remote Peruvian village. When the production wraps after the death of one of the stunt crew, Kansas decides to stay on with Maria (Stella Garcia), a local prostitute, with a view to bringing in more films. One evening, Kansas watches on in astonishment as the villagers recreate the filming of the movie using cameras and mics fashioned from twigs, performing the fake fist fights they saw being shot for real. The ‘shooting’ becomes an almost religious ritual, much to the alarm of the local padre (Tomas Milian), who beseeches Kansas to break the spell the movie has cast over the village. 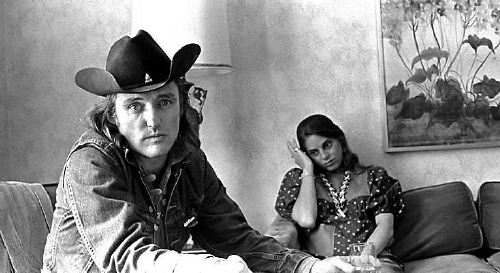 The Last Movie is a perfect encapsulation of the chaotic genius that took Hopper to the brink of self-destruction; an exploration of cultural imperialism, as well as an attack on the Hollywood old guard whose retrograde, profligate methods had rendered their product redundant by the end of the ‘60s. Hopper made a conscious effort to puncture the aura of mystery that surrounded the filmmaking process in the days before DVD extras pulled back the curtain; utilising ‘scene missing’ cards, conspicuous boom shots and reel countdowns in its ‘film within a film’ structure. The discrete vérité approach and overlapping dialogue bring Altman to mind, while László Kovács’ photography lingers on the shimmering lakes, snowy peaks and bucolic sprawls of the backdrop, providing a snapshot of everyday life in the village with a minimum of intrusion.

After an extensive search, Hopper decided that he was the only one capable of portraying Kansas; and though Kansas is supposed to be a much older man, it’s hard to imagine a more perfect confluence of actor and character. Through Kansas, Hopper vented his disillusionment at the rapid dissipation of ‘60s optimism and the inexorable slide into empty hedonism and ersatz spirituality. Samuel Fuller makes a cameo - playing the archetypal macho, cigar-chomping, tyrannical director - and Don Gordon brings frantic charisma to Neville, a fellow émigré with grand schemes of his own.

Hopper used The Last Movie to express his misgivings about Hollywood morality penetrating every corner of the globe; how it is incapable of assimilating social nuance, and what happens when its tenets are taken at face value.
Dennis Hopper, eh? What ever happened to him? Oh yeah. Right. Er…more from You Ain't Seen Me, Right? next week.