You wouldn't download an assclown: A rant on why cinemas are dying

Pity Hollywood. For they are losing money hand over fist because of dirty internet pirates. Pity John Travolta and his private jet fleet; pity George Clooney unable to heat his Italian lakeside mansion; Pity Tom Cruise for... well, being Tom Cruise. But pity these poor studios and stars, living on the breadline and having to sacrifice so much in their struggle to survive.

Or, to look at it a different way: fuck these cosseted prima-donnas and their multi-million dollar lifestyles. Does anybody lose sleep at night because Nicole Kidman has to rely on cosmetic adverts to earn her umpteenth million dollars that month?

Do you donate some of your wages because Sony can only find $130 Million to make Spider-Man 32? 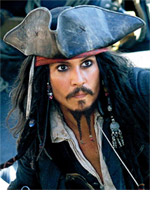 But hold on, don't think I'm advocating piracy. It's illegal and funds child molesters and bombs and stuff. And why would you want to watch a badly-copied version of the latest blockbuster filmed in a cinema with people wandering about and talking over the soundtrack? You wouldn't.

But ask yourself another question - why would you want to pay upwards of Ł25 to go to the cinema for the delight of seeing the latest blockbuster with people wandering about and talking over the soundtrack? Because that's what invariably happens.

When was the last time you went to the cinema and everybody just sat there and enjoyed the movie without getting up for a piss, munching stuff (why does watching movies equate with a portable fucking picnic feast? It's two hours - you can survive that long without stuffing your face) or talking incessantly all the way through? (*feels anger rising already*)

Hollywood's big studios point at internet piracy as the downfall of everything. They are not content with simply saying, "Look, you're stealing our profits and Gwyneth Paltrow can't afford to live on merely $15 million per year". Instead, they clumsily try and connect you downloading Rush Hour 4 with funding Muslim paedos and dog fighting arenas and granny punching. (*sigh*)

Really? Is that the best you can do? Just admit you're pissed off that your company only made $800,000 million last year and you're fucking greedy. Don't try and tell some bored 12 year-old in his parent's basement downloading X-Men: Clumsy Allegory that every time he watches a pirate movie that a beautiful butterfly is bummed to death by carjackers.


I get that piracy costs studios profits, I'm not stupid. But blaming internet pirates is lazy and, more accurately, wrong. You want a better reason that your profits are down? People don't go to the cinema that often any more. Because it's turned into an awful, expensive experience more akin to The Road Warrior than a fun evening out.

Cinema target audiences are, we're told, 16-25 year-olds. That is the golden market all studios aim for. Why? Because most people over 25 can't be bothered any more; they have too much to do instead of spending the evening in Hell trying to watch a film they don't really fancy that much anyway but they need to try and recapture some of the passion from courting days instead of sinking into silent reflection and slowly increasing resentment that somehow, somewhere they fucked their lives up and are now destined to spend the next 40 years in a slowly suffocating life. [Whoah - Ed's note]

Who goes to the cinema these days? Why would you bother to? Ticket prices range from Ł8-15 per person, plus snacks. If you have kids, you've had to arrange a babysitter which may incur more costs. You line up to get a ticket, line up to buy processed shit you can get in a supermarket for half the price, line up to go into the auditorium and then find a seat. 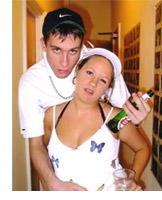 If you're lucky, you won't be squashed in the middle. But you know, just know, you're going to get stuck behind somebody with massive hair or kicked repeatedly by Crazy Legs Crane behind you. You can sit through 25mins of adverts that people inexplicably laugh at - do these morons laugh at home pointing at the television? - and look around trying to identify the fucking clown with the laser-pointer pen.

And when the film finally starts, somebody will need a pee so you'll all have to stand up as they shuffle out past you. YOU KNEW YOU WERE WATCHING A FILM, GO TO THE TOILET FIRST YOU SELFISH FUCKING INFANT-BLADDERED CHIMPANZEE BASTARD.

And talking. The endless talking. "Who's that?" "Which one is the robot?" "So she's the ghost?" "Why is Die Hard fighting a plane?" as you grind your teeth to powder as your partner grasps your upper arm whispering, "Don't, just ignore it".

The last time I went to the cinema, I had to drag the manager in to eject a group of teenagers at the front who were clearly there to keep warm and dry, had no interest in the film and thought it could be improved by commentary and phone calls.

He wouldn't do anything, which resulted in my dragging one kid from his seat and threatening to beat him in front of his girlfriend, a refund and a dramatic storming from the cinema with an embarrassed friend trailing behind me clearly not listening to my outraged bellows about "never returning to this fleapit fuckpond again" and remaining unresponsive to my questions about obtaining portable dirty bombs. (Saddam Hussein wanted them to kill thousands of Kurds. I wanted one to kill 40-50 cinema-goers who couldn't still their idiocy for longer than 126 minutes.)
More:  Anger  Rage  Fury  Assclowns
Follow us on Twitter @The_Shiznit for more fun features, film reviews and occasional commentary on what the best type of crisps are.
We are using Patreon to cover our hosting fees. So please consider chucking a few digital pennies our way by clicking on this link. Thanks!
Next Page »