Your indie film is shit

Independent Cinema. A once byword for daring, independent filmmaking has been co-opted by the studios into what now means a quirky, feel-good turd wrapped in a soundtrack by the likes of Smog, Ween and any other number of lo-fi bands that play coffee-houses across America.

Indie cinema is studio-backed and financed fluff that does nothing different to major releases other than have a smaller marketing budget and smaller name actors desperately grubbing for credibility amongst their Mac-using peers. They want to appear at Sundance and be nominated for Oscars, whilst maintaining an indie-ethos and a smug, "Yeah we're different to Will Smith movies" air. 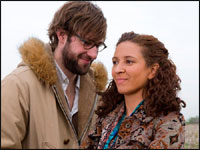 No you're not, Away We Go, 500 Days of Summer, Peter & Vanya, Love In Paris and any other number of forgettable lightweight films that refuse to take advantage of having the freedom that a lesser-budget film provides. You're the same shit that Jennifer Aniston makes, you just wear a scruffy jumper you bought from a second hand store.

Truly independent cinema takes risks, doesn't follow the safe formulaic path of studio releases and tries to do something different.

And right now, the biggest indie director and self-proclaimed "Best Director in the World" Lars Von Trier is busy defending his latest, Antichrist, from the boos at Cannes, the outrage from Daily Mail critic Chris Tookey and shrugging at the howls of outrage from middle America magazines like Variety and Hollywood Reporter.

If you're familiar with Von Trier, you know what to expect from Antichrist and you can't complain about being upset and offended: because that's precisely what he sets out to do. He creates wilfully cynical, dark and difficult films that defy categorisation and force you to confront emotions you probably don't really feel like dealing with on a sunny afternoon in September.

Dancer in The Dark? A Death-Row musical that ended with Bjork running away mid-shoot and trying to eat her costume because of her treatment by Von Trier. Dogville? Nicole Kidman subjected to repeated sexual abuse and dragging an iron weight around a set comprised of outlines drawn on the stage and nothing else. Breaking The Waves? Emily Watson degrading herself sexually at the behest of her crippled husband. The Idiots? People pretending to be retarded to see what they can get away with.

Antichrist? Genital mutilation, an infant child falling to his death with no cut-away before hitting the pavement, a talking fox, a crow that won't die and a deer in mid stillbirth running away with the dead baby literally hanging from its rear. And those are some of the more cheerful moments. 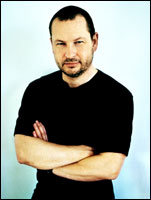 Is it a good film? I don't know. Is it art? Absolutely. Is it entertaining? That's the wrong word, I'd use powerful. Is it for everybody? Not at all. But that's what indie cinema should be about; using the freedom from the studio system to attempt to explore ideas and emotions that you'd never get away with within the system.

And I'm sorry, but Away We Go - a film about two people trying to decide where to have their baby - is labelled 'indie'? The fuck it is. That could star Eric Bana and Rachel Weisz with a soundtrack by The Goo Goo Dolls and tie-in novella reviewed by Richard & Judy.

Whether you like Von Trier or not, it is vital that directors such as him and Todd Solondz exist and make challenging films with ideas you may not agree with or like.

Because otherwise we are left with a landscape that offers such directors as Spike Jonze (Being John Malkovich was indie, but he's now making Where The Wild Things Are with reshoots after studio suggestions) or Michel Gondry (Eternal Sunshine of The Spotless Mind was indie but he's now doing The Green Hornet).

Tarantino was indie (well, Reservoir Dogs was, but his every film since has been a star bloated floater... discuss) but now directs episodes of ER and has become a parody.

Former directors that once proclaimed their indie-cred but have been swallowed into the system and now make major-budget summer release movies - their individualism hammered into a more palatable style and given multi-million dollar budgets and release dates ahead of filming.

Hollywood loves quirky idiosyncratic voices and seeks them out, whereupon they dilute what they originally liked and make it into a Happy Meal version that won't upset or offend or puzzle the audience in Kansas. Because it's all about the $$$$$ at the end of the day.

And then stands somebody like Lars Von Trier. He's been accused of many many things with his films - misogyny, emotional aloofness, mindless shock tactics, cynicism, cruelty towards his actresses and so on. But not once has he been accused of making a generic film that could be made by anybody else. Like him or love him, Von Trier makes films for himself that happen to find an audience. 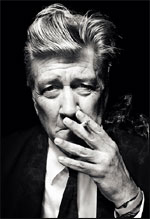 As does David Lynch, another independent director. He flirted with mainstream offerings like The Elephant Man and The Straight Story, but retreated back into making films exactly how he wants, on his own terms - audiences and Hollywood be damned.

His TV series Twin Peaks was a monster hit for the first series, but then audience figures fell away when it got stranger and stranger. Lynch has since confessed that he made it deliberately more "Lynch-ian" when he became uncomfortable with the success.

Inland Empire was his most recent. Did I watch and love it? Yep. Did I understand what the fuck was going on at any point? Nope. But I love Lynch's films and can't explain why; I just surrender to his vision and world and let him take me on the ride.

Did I enjoy "Inland Empire"? Maybe, but it challenged me, it made me angry and made me happy, confused and confounded me, offended and upset me. This is what I expect and demand from independent cinema.

Darren Aronofsky is another. Pi? Black and white, obscure and intelligent. Requiem For a Dream? Horrible, horrible film, but in a good way - the best anti-drugs advert ever made. The Fountain? Still not sure about that but I enjoy it more each time I watch it - and the fact the movie still got made after Brad Pitt pulled out speaks volumes. The Wrestler? Mickey Rourke as an ex-WWF star down on his luck... okay, this shouldn't have worked but we all know how that turned out. He's a director that has remained outside of the system and makes personal films with no eye towards an audience.

That is what independent cinema should be. Films made with no real eye towards box office or reviews or appearing on Letterman to whore your product before release.

Films that tell a personal story, offer a vision unique to that director without a ready-made soundtrack; films that require you to work at. Not films that offer everything on a plate and are neatly resolved within 90mins with an option for a sequel.

Challenging, difficult, obscure, personal, infuriating, delightful, and offensive.
Indie films should be anything other than forgettable McMovies made with no real passion or involvement, telling bullshit stories that Hollywood could produce a million times better. 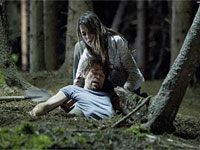 Which brings me back to Lars Von Trier and Antichrist.

Idiots will watch this solely on the outrage and disgust heaped upon it, and will walk away saying it was rubbish because it doesn't conform to traditional movie constructs. These are the same whooping bozos who buy Hostel and Hostel: Part II on DVD and sit guffawing at the violence and dismemberment meted out to women without questioning themselves for doing so. There is horrific violence in Antichrist, graphic and sickening sexual violence. But with a purpose, not for entertainment.

When female character 'She' mutilates herself (in extreme close-up) it is punishment for enjoying sex, which resulted in the death of her child. So what better way to punish herself than remove that which drove her to neglect her duties as a mother (her words), coupled with a flashback that suggests she saw her child climbing out the window but did nothing to prevent it, climaxing as he fell.

Yes, Von Trier's underlying theme of misogyny is present in Antichrist, but it is confronted and dealt with. The entire film is an exploration of being a woman, the mix of mother and sexual being, the strength of being female, the fear of males to a sexually aggressive female, the treatment of women throughout the years by men.

All themes & emotions that perhaps the average cinema-goer doesn't want to be forced to dig up and deal with, hence the outrage and genuine anger at Von Trier.

I get the feeling the reaction isn't so much towards the film but anger at not understanding the emotions and feelings brought up by watching.

So love him or hate him, Von Trier will continue to make his confrontational films and I'll continue to seek them out because I like to be challenged, prodded and goaded by a film. Anything beats sitting back munching snacks and watching quirky indie-type characters in yet another safe, non-participatory film masquerading as independent cinema.

Your Indie Film is Shit.

More:  Rant  Indie  Away We Go  Lars Von Trier  500 Days Of Summer
Follow us on Twitter @The_Shiznit for more fun features, film reviews and occasional commentary on what the best type of crisps are.
We are using Patreon to cover our hosting fees. So please consider chucking a few digital pennies our way by clicking on this link. Thanks!