Filmmaker Zack Snyder has released a brand new picture of Batman from the forthcoming superhero ensemble Justice League but Donald J Trump is still in the White House so the very concept of justice is a joke and we remain numb to everything.


The new image of Ben Affleck in full Batman costume is admittedly cool, showing the caped crusader swathed in darkness, which is what democracy dies in according to the Washington Post, who - like all media outlets who accurately reported Donald Trump's collusion with Russian state hackers - have been labelled as 'Fake News' by the serving President of the United States. 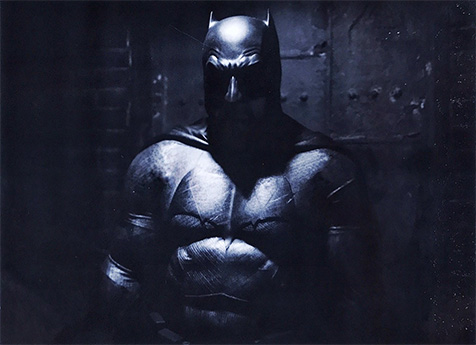 Batman, pictured yesterday, in his own blissfully fictional universe.


The new picture, released by Snyder on Twitter, which coincidentally is Donald Trump's favourite method of releasing factually-inaccurate propaganda, is drained of colour, rather like the faces of every right-minded American who woke up on the morning of November 9th to realise that oh my god, they did it, those stupid gullible selfish fucks actually did it, they voted him in.

The dark knight appears to be frowning in the new image, even though in the DC Cinematic Universe, Patrick Wilson is the US President, as opposed to, say, an orange-skinned former reality TV star who openly bragged about sexual assault during his presidential campaign and who built his entire political strategy on platforms of racism, sexism and misogyny.

Everyone should calm down. @BenAffleck is going to do a great job as Batman.

Production on Justice League will be completed by Joss Whedon and is due for theatrical release in November 2017, by which point Donald Trump will be celebrating the one year anniversary of his election victory by desecrating a whole new set of American ideals and democratic norms. The film will also star Henry Cavill as Superman, an alien from outer space who used to stand for American values but now who the fuck knows what that even means, and Gal Gadot as Wonder Woman, who under Trump's presidency would "have to face some sort of punishment" if she ever fell pregnant and decided she didn't want to carry the baby through to term. Also, Aquaman.

Batman will then appear in a standalone movie named The Batman in 2018 and that film will also star Joe Manganiello as villain Deathstroke, whose name brings to mind President Trump signing yet another executive order that'll probably lead to the deaths of hundreds and thousands of poor people, like the American Health Care Act, which promises to bump up to 22 million US citizens off of their health insurance in order to give the upper 5% bracket a tax cut.

Justice League is released in cinemas on November 17th and Donald Trump is literally the worst human being alive.

More:  Zack Snyder  Justice League  DC  Batman  Ben Affleck  Donald Trump
Follow us on Twitter @The_Shiznit for more fun features, film reviews and occasional commentary on what the best type of crisps are.
We are using Patreon to cover our hosting fees. So please consider chucking a few digital pennies our way by clicking on this link. Thanks!