A nice story about Drew Struzan

Remember a while back I told you the documentary on famed movie poster artist Drew Struzan had run out of money and asked you to donate? Well, I did. And now I have a lovely story about Drew meeting Harrison Ford straight from the director himself.


Erik Sharkey is the director of Drew: The Man Behind The Poster, a documentary on the legendary poster artist who, in all probability, has drawn at least one movie poster on your wall right now (two for me). Unfortunately, Erik ran out of money and was unable to complete the film without some of our help and money, so started a campaign to raise funds and finish the movie.

I donated a little, because it was payday and also because I was lucky enough to receive a couple of Drew's coffee table books (The Art Of Drew Struzan and Drew Struzan Oeuvre) as freebies earlier in the year, and figured I owed him nothing less. Part of the appeal was the promise of a personal story from Erik about the shooting of the movie, and lo and behold, today it appeared in my inbox. And now, I share it with you. Enjoy.

"
"
"When I was a kid I would stare at Drew Struzan's movie posters in the theatre lobby. His artwork would transport me to another world. I could get lost in the images he created. It was more than just film advertising. The poster told a story. It would set a tone and capture the story and characters of a film. It would build my excitement for seeing a film. And he could do it all with one image.

"One poster that I really loved specifically was his Indiana Jones And The Temple Of Doom poster. Raiders Of The Lost Ark was one of my favorite movies, so I was so excited about a new Indiana Jones adventure. And I remember seeing that Drew poster before I saw the film. I was so blown away by it. It let me know what kind of excitement I could expect from the film. And the way he captured the character of Indy in that portrait was amazing. That painting did more than just look like Indiana Jones, it was Indiana Jones. Drew perfectly captured the essence of that character. 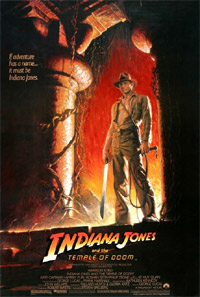 "So, years later I couldn't believe that I had the honor of directing a documentary about my favorite artist, Drew Struzan. It was a dream come true. In doing my interviews with Drew I could not believe that he never met Harrison Ford in person. They had spoken on the phone a few times but they had never met face to face. Drew told me that he poses as Indiana Jones in the portraits!

"When we found out that Harrison Ford agreed to be in the film and do an interview, it was a dream come true. I was going to interview the actor who played my childhood heroes: Han Solo and Indiana Jones.

"We were given roughly 48 hours notice. The interview was in Los Angeles and we are based in NY. So we dropped everything and headed to L.A. to do the interview. I was so excited to interview my favorite actor about my favorite artist. Because Drew is based in the west coast I knew he had to be there. It was the perfect chance for them to finally meet in person!

"Drew met us at the hotel where the interview would take place. We waited patiently for our turn to interview Mr. Ford. He was doing a junket so other people were waiting to interview him as well. I was so nervous and so excited. I was going to be there when Drew and Harrison Ford finally met for the first time! And we were going to document it for the film!

"Then it was our turn to enter the hotel room that Harrison was doing interviews in. We walked in with Drew with the cameras rolling. I was the first person to speak to Mr. Ford. I told him we were the crew with the Drew Struzan documentary then introduced him to Drew Struzan himself. Harrison Ford's face then lit up and you could see that he was excited to finally meet Drew.

"I could also see Drew's excitement at being face to face with the actor he has painted and drawn so many times. They had such a mutual respect for each other. Harrison joked about how Drew had made him look so good over the years and thanked him for it. He did an interview in which he praised Drew and his work.

"For me of course it was a dream come true. I felt like I was in geek heaven! And Harrison Ford's interview is one of the highlights of the film."

- Erik Sharkey, director of 'Drew: The Man Behind The Poster
Lovely. Thanks, Erik! By the way, did anyone else realise that his name is Drew, and he draws? WHOAH.

More:  Drew Struzan  Harrison Ford  Eric Starkey  Indiana Jones  Indiana Jones And The Temple Of Doom
Follow us on Twitter @The_Shiznit for more fun features, film reviews and occasional commentary on what the best type of crisps are.
We are using Patreon to cover our hosting fees. So please consider chucking a few digital pennies our way by clicking on this link. Thanks!