Alien prequel not so much

That kickass Ridley Scott Alien prequel you've been looking forward to? Sucks to be you. The film is now called Prometheus and has dick-all to do with xenomorphs, facehuggers and your momma.


Let's play Good News, Bad News. First, the Bad News: the first credible Alien project in years has bit the dust, because the Ridley Scott-directed prequel(s) have now morphed into something completely different. Shame, because after years of watching Alien clumsily slug it out with Predator like two drunks fist-fighting in a car park, I was down with the idea of a back-to-basics Alien movie. 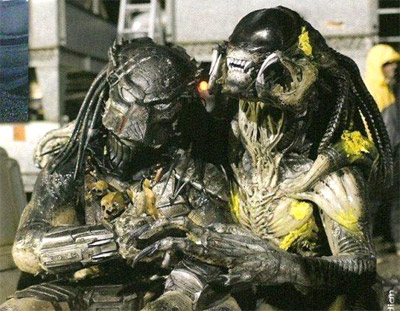 Now, the Good News. Prometheus, as it is now known, will be an all-new sci-fi set in a completely new universe. Scott is still directed, Lost scribe Damon Lindelof is on script duty (turns out we were the aliens) and Noomi Rapace, The Girl Who Used To Have A Dragon Tattoo, has been confirmed as the lead. Interesting and interestinger.

Deadline broke the story last night, with a quote from Ridley Scott that explains his thinking.

"
"
"While Alien was indeed the jumping off point for this project, out of the creative process evolved a new, grand mythology and universe in which this original story takes place.

"The keen fan will recognize strands of Alien's DNA, so to speak, but the ideas tackled in this film are unique, large and provocative. I couldn't be more pleased to have found the singular tale I'd been searching for, and finally return to this genre that's so close to my heart."
Hmm. First thing's first, Fox should be congratulated on letting this happen - if Ridley Scott truly felt this story would be better told without having to abide by franchise law, then kudos on giving the man what he needed. Rapace is a fine choice for a lead, and Angelina Jolie and Charlize Theron are both reportedly interested, which gives you some idea of how hot a property this could be.

However, I doubt I'll be able to watch Prometheus without thinking about how the project started and what could have been. It seems a pretty long way into pre-production to completely remove a key element like acid-tongued alien bastards and Scott has mentioned several times that the prequels would have focused on the 'Space Jockeys' from the original. Is this now not happening at all? Do we have to pretend we're not supposed to know about the film's genesis and the gene pool it came from?

More importantly, if Prometheus does feature aliens - and you suspect it still may - then how could they possibly hope to live up to Giger's xenomorphs?

Still so many questions, and so little information to go on. Consider me intrigued yet skeptical in equal measure. I'm officially skeptrigued.

More:  Alien Prequel  Ridley Scott  Prometheus  Noomi Rapace
Follow us on Twitter @The_Shiznit for more fun features, film reviews and occasional commentary on what the best type of crisps are.
We are using Patreon to cover our hosting fees. So please consider chucking a few digital pennies our way by clicking on this link. Thanks!