CNN news anchor and journalist Anderson Cooper has shocked the world by publicly outing himself as a grey man.

"
"
The fact is, I'm grey, always have been, always will be, and I couldn't be any more happy, comfortable with myself, and proud.
Though he had been open about his greyness with family and friends, Cooper has until now preferred to keep his counsel on the subject in public, stressing that his work as a journalist required a degree of personal neutrality.

It's wonderful that Anderson feels comfortable enough with his greyness to come out and say, "I'm grey, this is me."

But it's a surprise and a half. I mean, you wouldn't know it to look at him. 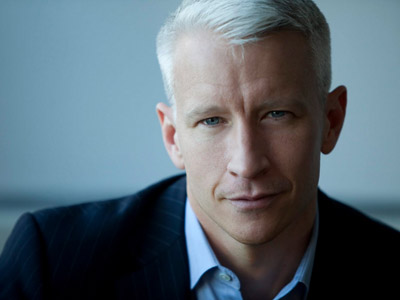 Cooper had been comfortable enough in private to enjoy frequent visits to The Silver Fox, one of New York's underground grey clubs.

Cooper's declaration comes at a time when grey rights are dominating public debate. There are growing calls in several US states to legalise grey marriage, while grey films such as The Artist have won plaudits in the mainstream arena.

Rumours that Tom Cruise's recent split from wife Katie Holmes was brought about by his secret greyness have been emphatically denied by lots of eerily calm guys in expensive suits.

More:  Anderson Cooper  Newsreaders  Random  CNN
Follow us on Twitter @The_Shiznit for more fun features, film reviews and occasional commentary on what the best type of crisps are.
We are using Patreon to cover our hosting fees. So please consider chucking a few digital pennies our way by clicking on this link. Thanks!