Andy Serkis for an Oscar? Let's nip this in the bud, shall we?

According to reputable film-type people, Fox are going to push an Oscar campaign for Andy Serkis, due to his excellent motion-capture work in Rise Of The Planet Of The Apes. You maniacs! Etc.


I was as surprised as anyone at how good Rise Of The Planet Of The Apes was: a confident, pacey and thrilling blockbuster that ended up approximately 1% as embarrassing at it could have been. That's mostly in part to a screenplay that didn't try and cram in monkey puns every fourth second, but I will admit that a big reason Apes got a rise out of me was the credulity of Weta's performance-capture, particularly the captured performance of Andy Serkis as Caesar.

News hit the web today of Fox being so happy with Serkis' performance, and by proxy the performance of the film (nearly half a billion dollars worldwide and counting), they've locked him in for potential sequels to the tune of a "ten-figure salary". Holy. Shit. You wonder how strong the urge must have been for the Fox executives in that meeting to suggest they actually just hire a real monkey WHO WOULD LITERALLY WORK FOR PEANUTS. Still, he deserves it. Good for Andy. Well done old chimp.

But wait. Deadline also reports that Fox are waging an Oscar campaign for Andy Serkis to be recognised at the Academy Awards in February. Hold the banana phone. 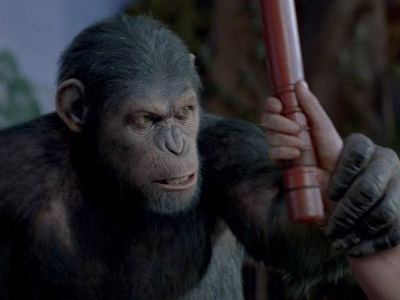 Would he have to go as a monkey? In a tux? THIS CHANGES EVERYTHING.


What could this mean? I would hope that Fox would be angling for the creation of a special category recognising performance-capture as another string to the actor's bow. It's something a number of directors have been lobbying for for a while, including James Cameron, and - less successfully - Robert Zemeckis. In all honesty, it could just be canny marketing on Fox's part: even floating the story puts the words 'Rise Of The Planet Of The Apes' and 'Oscar' out there before the movie is released on DVD. It probably didn't hurt Serkis' contract negotiations either.

However, I fear Fox may lobby for Serkis to be recognised in one of the existing Oscar categories, most likely Best Supporting Actor. Hop on Twitter right now and you'll see people backing Serkis for an Oscar. As much as I appreciated his work in Rise Of The Planet Of The Apes, and indeed Tintin/Lord Of The Rings/King Kong, I'm sorry, but any time you squeeze your nuts into that lycra ping pong suit and step into the Volume, a huge, essential part of your craft is lost - it may be called performance capture, but it doesn't capture everything. 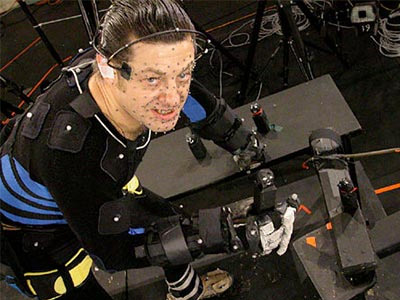 
Serkis provides the movement for Caesar; he brings the character to life, that's for sure. There's even a certain degree of nuance there, arguably. But, BUT: to suggest that Andy Serkis and Andy Serkis alone should be rewarded for that character is to do a gigantic disservice to everyone at Weta who covered him in pixels and made him swing.

I don't care how many nodes are attached to your face: if I can't see you acting, it's not just you acting. How can we tell which parts of Caesar's performance come from Serkis and which were added in post-production? A nod here, a smirk there. Who knows? Acting via mo-cap is like acting on steroids - you're only achieving that performance with substantial help. That's just another thing mo-capped actors need to come to terms with when they sign on the dotted line. It's also why not everyone is willing to do it. Serkis makes great money ploughing that furrow, but he's pretty much unopposed when it comes to finding the work. 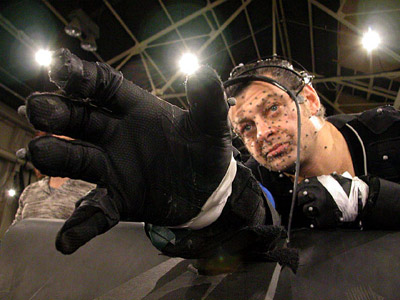 "This is how much dignity costs."


Besides, jumping on the 'Serkis for an Oscar' bandwagon suggests that there aren't even five actors who gave better performances all year as humans. How insulting is that? Serkis is brilliant at getting lost in animal performances, tics and all - there's no one better at monkeying around. But to suggest an actor portraying an ape is in any way more impressive than an actor giving an invested, emotional, human performance is insane. As homo sapiens, we're capable of recognising extraordinary depth in an actor's performance; when it comes to motion-captured monkeys, what are we judging them on, exactly? "Well, he sure looks like an ape!" That's it.

Andy Serkis for an Oscar? Look, I love the guy, but I hope it's one of his non-digital performances that's rewarded one day. Remember, we're talking about the ancient technophobes of the Academy here - they've only just come to terms with the fact we evolved from apes, therefore probably aren't too keen on giving them any of their awards.

More:  Andy Serkis  Rise Of The Planet Of The Apes  Performance Capture  Oscars
Follow us on Twitter @The_Shiznit for more fun features, film reviews and occasional commentary on what the best type of crisps are.
We are using Patreon to cover our hosting fees. So please consider chucking a few digital pennies our way by clicking on this link. Thanks!