Angelina Jolie to play Marilyn Monroe in her terrier's biopic

Angelina Jolie will play history's sexiest dead chick Marilyn Monroe in a movie biopic, shot from the perspective of her dog. I FEEL LIKE I'M TAKING CRAZY PILLS.

I get that Angelina Jolie is a "classic beauty" (whatever that means) and, sure, she's one of the only actresses alive that I could consider entertaining as Cleopatra. But Marilyn Monroe? That's a stretch. Even Jolie's biggest admirers have to admit she doesn't exactly fit the bill.

Nonetheless, she's down to play the former Norma Jean Baker in a new biopic, The Life And Opinions Of Maf The Dog. Sounds like an odd name for a Monroe bio? That's because it's written from the perspective of Marilyn's Maltese terrier, Maf, her little furry confidante for the last two years of her life.

George Clooney will also star as Frank Sinatra, who gifted Monroe the dog in 1960. Incidentally, Maf is short for 'Mafia Honey'. I'd like to point out that Frank Sinatra was not associated with the Mafia in any way, shape or form, no sirree.

Monroe was much smarter than most gave her credit for, but she did play up to her airhead public persona, whereas Jolie is so sincere, she seems determined to make Mother Teresa look like a selfish old mingebag. That's why this news raises an eyebrow: the two other Monrovies in production, starring Naomi Watts and Michelle Williams, sound much closer to the mark.

Also, I'm not sure I'm on board this new trend for telling stories through the eyes of animals; don't forget, Steven Spielberg's next movie, War Horse, is a harrowing World War II drama as told by a horse. It's only a matter of time before someone buys the life rights of Richard Gere's hamster. 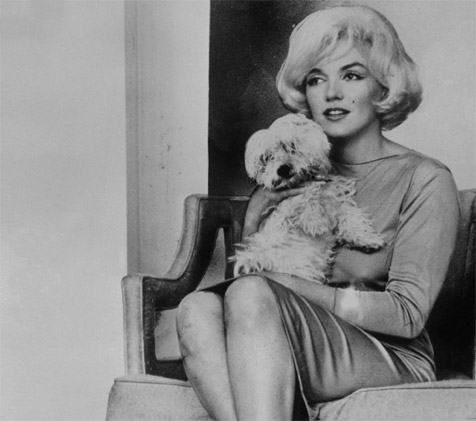 More:  Angelina Jolie  Marilyn Monroe  Dogs  Wait What
Follow us on Twitter @The_Shiznit for more fun features, film reviews and occasional commentary on what the best type of crisps are.
We are using Patreon to cover our hosting fees. So please consider chucking a few digital pennies our way by clicking on this link. Thanks!