Anne Hathaway to Les it up?

Don't worry, you haven't accidentally stumbled onto The Daily Sport website. We're TheShiznit.co.uk: dedicated to bringing you the finest movie news and reviews. Here's something about a stage musical.


Like most people who have seen 3 West End plays, I now consider myself a veteran of the theatre. But thanks to my near-retarded level of love for film, I can't see a play without imagining what it would be like if I were watching a Hollywood movie instead. Well thanks to Hollywood I no longer have to imagine - with War Horse and The Woman In Black on the way, it seems theatre adaptations are a hot ticket right now LOL ;D

But what about Tom Hooper's big screen version of Les Miserables, how's that coming along? Hugh Jackman has been cast as Jean Valjean for a while now, with Russell Crowe, Hayden Panettiere, Miranda Cosgrove, Lucy Hale, Emma Watson, Geoffrey Rush, Helena Bonham Carter, Amy Adams and Rebecca Hall all rumoured to be vying for various roles.

With an epic story, and nearly 50 songs to pick from, Les Mis is arguably the biggest and most precious stage show being given a movie treatment at the moment, and eyebrows have been raised at reports Anne Hathaway is being considered for the role of Fantine. At least that's what it said on a thing I read on the internet - nobody thinks she can sing. So is Hathaway up to the task? See for yourself:

I think that's a yes. And so there you have it - actress trained to sing cast in film based on musical. Amazing.
One genuinely interesting thing to come out of this is how quickly theatre nerds emerged to defend their art with terminal intensity. I thought it was a phenomenon restricted to comic book geeks, but apparently not. Check out this snippet from the Empire article we sourced all this info from, who dared to re-post a mistake made by the article they shamelessly stole it from in the first place (which wasn't actually a mistake - just iffy wording): 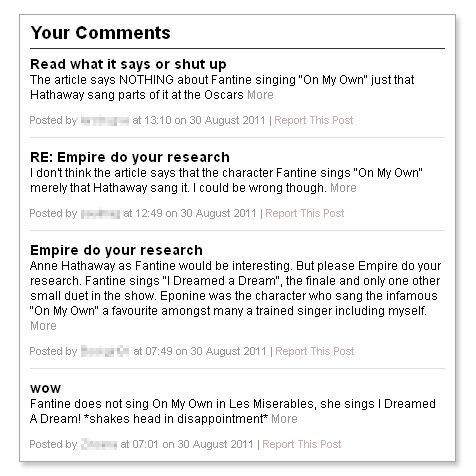 Harsh, right? But still funny. Even more hilarious when you remember the average theatregoer looks like this: 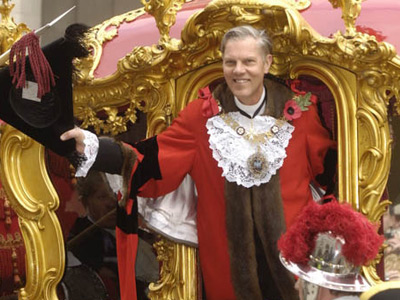 I think if we've learnt anything from this sorry saga, it's that Saturday is a really slow day for news. Now if you'll excuse me, I have to go book some tickets for Shrek.

More:  Les Miserables  Anne Hathaway  Hugh Jackman  Tom Hooper
Follow us on Twitter @The_Shiznit for more fun features, film reviews and occasional commentary on what the best type of crisps are.
We are using Patreon to cover our hosting fees. So please consider chucking a few digital pennies our way by clicking on this link. Thanks!