Cary Elwes will limp back to the Saw franchise this Halloween, as his Doctor Gordon returns - minus one foot - in Saw VII. It's in 3D! (*salsa party*)

I may be the only right-minded person left on the planet who still gives a shit about the Saw movies, but I'm reporting this anyway. Latino Review are claiming that Cary Elwes, star of the original Saw, will return for the seventh movie in the franchise.

Just let that sink in for a second. Yes, pause for effect.

Even though the Saw movies have gotten steadily worse with each iteration - no mean feat, considering they hit rock bottom at around Saw IV - this is the one dangling story thread I've been waiting for the writers to address: what happened to Elwes' Dr Gordon after he sawed his foot off and limped to freedom?

I assumed he either fell down an open manhole cover or got abducted by a giant magic eagle, but I guess the synopsis is as good a guess as any:

"
"
"As a deadly battle rages over Jigsaw's brutal legacy, a group of Jigsaw survivors gathers to seek the support of self-help guru and fellow survivor Bobby Dagen, a man whose own dark secrets unleash a new wave of terror."
Sounds... uhh, okay it still sounds shit. But this time it's in 3D! That means you'll have to pay extra to see it! Frankly I'd prefer it in 4D, so you could warp time and unsee it once you've sat through it. Or maybe 5D, when characters come out of the screen and actively slaughter the audience. But that's just me, I'm old-fashioned like that. 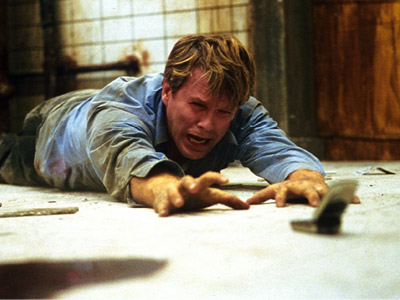 Elwes played it cool waiting for the confirmation call.
More:  Saw VII  Saw  Cary Elwes  Why Are You Writing About This
Follow us on Twitter @The_Shiznit for more fun features, film reviews and occasional commentary on what the best type of crisps are.
We are using Patreon to cover our hosting fees. So please consider chucking a few digital pennies our way by clicking on this link. Thanks!