Charlie Sheen to drive off a cliff? Sounds about right

The producers of Two And A Half Men have hinted that Charlie Sheen's character may be written out of the show in the opening episode of the new series by saying that he drove off a cliff. Presumably, if Sheen does this in real life before then, the plans will be scrapped for fear of 'bad taste'.

Apparently (I say this because I don't watch the show or, more to the point, every time I do it seems like I'm watching the same episode), at the end of the last series (the 8th), Charlie was seen leaving to go to the airport with a love interest. This is presumably enough for him to be written out of the show forever.

Well, the producers don't think so and there are now rumours that, at the start of the new series (the 9th, for those keeping count), it will be revealed that Charlie has been killed off - to prevent any possibility of him returning to the show.

Seems a bit harsh, if you ask me - especially for a sitcom. How will that go down in the episode? It will seem out of place watching Jon Cryer and the fat kid grieving for the death of Uncle Charlie when everyone knows they're glad to be shot of him. At the same time, having any comedy moments after such a revelation will surely seem cheap, especially with the sudden-but-timely arrival of Ashton Kutcher.

And, when the character Charlie has already effectively 'left', doesn't this idea of having him drive off a cliff just seem like wish fulfilment for the producers? I hear their first idea was to open with Cryer taping two razorblades to either side of a penny and then slashing the inside of Sheens's thigh, so that he bleeds out and dies slowly over the course of 22 minutes. (*canned laughter*) 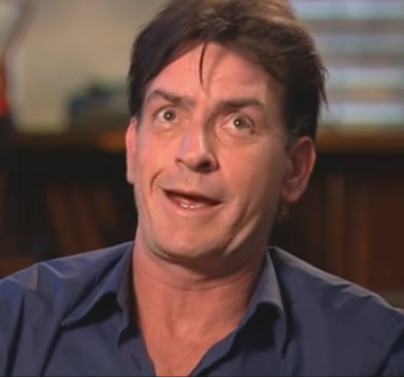 Last shot, and then fade to black.

More:  Two And A Half Men  Charlie Sheen  Jon Cryer
Follow us on Twitter @The_Shiznit for more fun features, film reviews and occasional commentary on what the best type of crisps are.
We are using Patreon to cover our hosting fees. So please consider chucking a few digital pennies our way by clicking on this link. Thanks!