The Expendables 2 is still fresh in most people’s minds – or, more accurately, it was immediately forgotten as soon as they left the cinema – but Sly Stallone is already preparing to inject his next dose of steroids... er... that's 'steroids-infused movie'. Or, y'know, an analogy that's less libellous.

Anyway, the lunk-headed star teased new information about Expendables 3: Havana Nights (subtitle to be confirmed) via an intriguing and seemingly indecipherable code. In a brilliant piece of viral marketing for the film, if you can unlock the secrets in his message, you can uncover some interesting casting news. Here is the head-scratching puzzle in full: 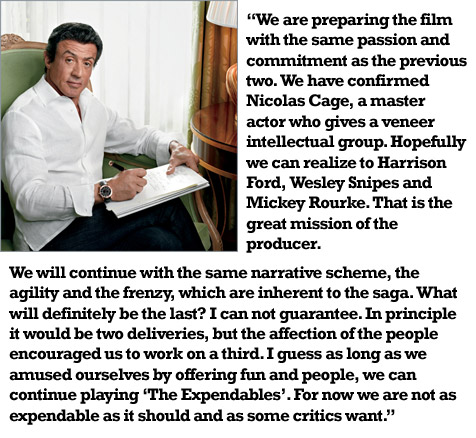 Personally, I’m stumped. I’ve tried swapping letters, reading every tenth word and looking at it in the mirror, but I can’t make head nor tail of it.

Luckily, a spokesperson for Lionsgate has offered a companion clue to the cypher, stating:

"
"
This was a quote he gave in an interview with a Spanish newspaper that has been run through Google Translate. Everyone seems to have assumed that Mr Stallone wrote this himself but it's actually a poorly translated quote put up on a Facebook page attributed to him.

Mr Stallone actually has a very good command of the English language and can type up to 40 words a minute. The REAL news that you should be focusing your attention on here is that Nicolas Cage is going to be in the movie! How awesome is that?
Hmm. Interesting. The mention of 'Spanish' there might suggest that this is a linguistics puzzle as well as a cryptic one, but, frankly, I'm at a loss. What can it all mean?

More:  The Expendables 3  The Expendables  Sylvester Stallone
Follow us on Twitter @The_Shiznit for more fun features, film reviews and occasional commentary on what the best type of crisps are.
We are using Patreon to cover our hosting fees. So please consider chucking a few digital pennies our way by clicking on this link. Thanks!