Otherwise known as Another Fucking Vampire Movie, Ethan Hawke's Daybreakers has a new poster, and you can check out the trailer while you're at it. At least these vampires don't sparkle like gaywads.

The awesome True Blood aside, Twilight has blunted the bite of the modern vampire so much, the advent of a new bloodsucker movie is now greeted with a yawn rather than a yelp of excitement. Nineties us would be so ashamed of what we've become.

Luckily, Daybreakers looks like it might be pretty good. It's pitched in the near future, where vampires are now the dominant species on the planet, but blood is running dangerously low. Empire have the new poster, which you can see in full by clicking the thumbnail below. 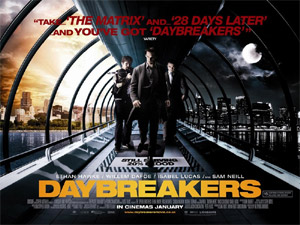 It's actually a pretty uninspiring poster, truth be told. How many times have we seen the darkside/lightside motif used before? And as poster quotes go, 'The Matrix meets 28 Days Later' is an awful comparison - both quality films, granted, but ones that feature precisely zero vampires. Nice work, Daybreakers Marketing Team! You've earned that Appletini!

The trailer below does a much better job of selling the movie. Just be grateful they're not bloody vegetarians. It's released in January next year, if you can abstain from fun things like Edward taught you to.

More:  Daybreakers  Ethan Hawke  Vampires
Follow us on Twitter @The_Shiznit for more fun features, film reviews and occasional commentary on what the best type of crisps are.
We are using Patreon to cover our hosting fees. So please consider chucking a few digital pennies our way by clicking on this link. Thanks!