Dear Keith Lemon, your film is bad and you should feel bad

Brace yourself, Britain: the country's least amusing comedy character is promoting his new movie. Now's the perfect time to slit those wrists you're always talking about.


I know you're not really allowed to slag off a film without seeing any of it, but in the case of Keith Lemon: The Film, I think you guys will probably cut me some slack. The big-screen adventure of ITV2's figurehead comedy character, as played by Leigh Francis, looks set to be every inch the masterpiece that Ali G Indahouse was (and this one has a Verne Troyer cameo too, which obviously makes it miles better).

It's not enough that Keith Lemon will have a film we have to ignore at the cinema, but the promotional campaign has already begun. Peek inside this week's Total Film and you'll see several spreads of 'Keith' dressed up as various movie characters. Posters have started appearing at bus stops. Lemon himself has begun touring the country, turning up in cinemas and peddling his own brand of hilarious tomfoolery i.e. being a cunt. 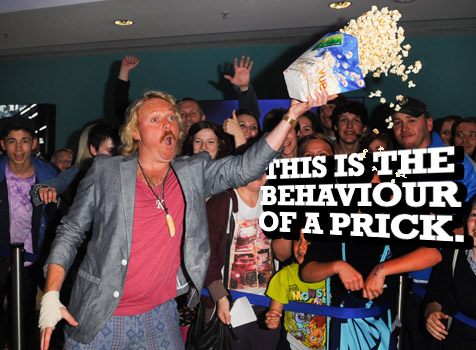 I don't know, maybe you watch Celebrity Juice and squeeze a few chuckles out of it from time to time (LOL that Ant and Dec episode LOL). It's one thing being quick-witted and crude when Fearne Cotton is lobbing you softballs, but it's quite another taking that comedy character and putting him in a scripted situation where he doesn't have an audience to laugh at him, or a punchbag like Peter Andre to soak up all the ire in the room.

Just look at the calibre of the celebrities Francis has managed to wrangle for his movie: it reads like the guest list to the world's most awful party. David Hasselhoff. Gary Barlow. Oh, what a surprise, Holly Willoughby and Fearne Cotton. Kevin Bishop wasn't doing anything. Ronan Keating. Myleene Klass. Kelly fucking Brook. I've defended her in the past, for two obvious reasons, but the fact she can't even answer the phone and say "Hello, Kelly Brook speaking!" convincingly in the trailer suggests she won't be troubling Streep at the Kodak Theatre next year.

If you're in any doubt of Keith Lemon's 'wit', here are a few choice quotes from his interview at the Vue cinema in Leeds:

"
"
"I called Kelly [Brook] Sloth on stage because she looked like Sloth from The Goonies until they put her make-up on."
"
"
"If I were the next James Bond, Kelly Brook would be my Bond girl and I'd call her Kelly F*!k"
I see what you did there, Keith: you drew attention to the fact that Kelly Brook is attractive and that you'd quite like to put your penis inside of her. I wonder if that kind of puerile humour will continue in the movie?

Shocker. It's quite telling that the press release just sent out read: "Please also see some pics from tonight where Lemon was greeted by his fans on his return to his home town, by helicopter no less." There were no such pictures attached.

More:  Keith Lemon The Film  Leigh Francis  Kelly Brook
Follow us on Twitter @The_Shiznit for more fun features, film reviews and occasional commentary on what the best type of crisps are.
We are using Patreon to cover our hosting fees. So please consider chucking a few digital pennies our way by clicking on this link. Thanks!