Here's what we know about Die Hard 5, including URRRRGH GOD THIS IS ACTUALLY HAPPENING and WHY WHY WON'T THEY LISTEN?


I'll admit: Die Hard 4.0 wasn't nearly as bad as it could have been. I could have done without the punch-up with the fighter plane and John McClane's asbestos skin, but it was sort of enjoyable. One thing it was not, however, was a Die Hard movie. I now consider it a 'What if...?' experiment - a recreation of what would have happened if the powers that be had actually let the guy from Underworld direct a fourth Die Hard movie, but without any violence or swearing.

You remember this bit, right before John uppercuts the unicorn into space.


It didn't really happen. Die Hard 4. 0 was sort of like one of those 'alternate universe' episodes of Friends where they can't think of any new ideas so they look at what life would have been like if Monica was still fat and Ross was cool and Joey was actually a child molester or something.

Naturally, news of Die Hard 5 moving forward greatly troubles me. What I thought was a semi-conscious dream is fast becoming a terrifying, inescapable waking nightmare.

Here's the pitch, according to Twitch:

"
"
"In keeping with the trend of each Die Hard movie being larger than the last the fifth installment is going to move into international territory.

Our sources tell us Die Hard 5 will be set largely in Russia with John McClane accompanied there by his son and the two drawn into a conflict with local forces. Cue multi-generational wisecracking."
Pop quiz: someone, anyone, give me an example of a movie in which introducing the grown-up son of a badass character has ever worked. Anyone? Didn't think so. Newsflash, Hollywood jerks: nobody wants to see Son Of Die Hard any more than they wanted to see Son Of The Mask. Nobody wants to see Die Hardski. Nobody wants to see Anton fucking Yelchin play John McClane fucking Jr. I FEEL LIKE I'M TAKING CRAZY PILLS.

Here's a pill that might sweeten the load. According to the same (unverified) reports, the director shortlist for Die Hard 5 is down to these four badasses. 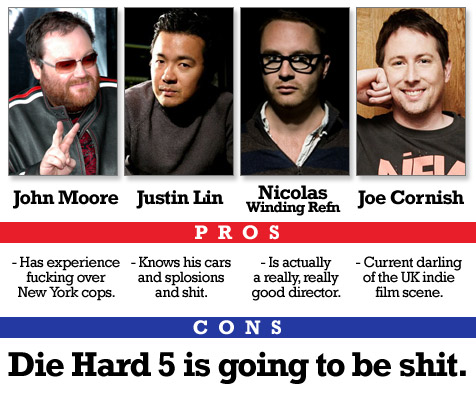 Naturally though, the front-runner is allegedly John Moore, the worst candidate by a country mile. He directed Max Payne, which can only mean he's on a mission to systematically destroy all cool New York cops from popular fiction by bringing them down from the inside.

More:  Die Hard 5  Bruce Willis  Terrible Ideas
Follow us on Twitter @The_Shiznit for more fun features, film reviews and occasional commentary on what the best type of crisps are.
We are using Patreon to cover our hosting fees. So please consider chucking a few digital pennies our way by clicking on this link. Thanks!