If you see something coming from Warner Bros studios in the near future, it's probably just a bird or a plane, because it sure ain't Superman.

Due to a legal dispute that's as long and drawn out as Superman Returns, it seems unlikely that the Man of Steel will be hitting our cinema screens again any time soon.

I can't pretend to fully understand (or care about) the legal argument, but the gist is that Warner Bros has until 2013 to make a Superman film before the rights to Action Comics #1 reverts to the Siegel family (heirs of Superman's creator Jerry Siegel) which will give them joint control over the character and help them earn a thick slice of the Kryptonite cake.

Action Comics #1 contained the first appearance of Supes himself, and therefore a description of all the character traits, strengths, weaknesses that are pretty important when explaining why a man can fly. And wear tights. This means the Siegels can get in on the red cape action in any future celluloid endeavour.

So why don't Warner Bros make a Superman film before 2013? Because, like the rest of us, they have no idea what to do with the character. Bryan Singer, for all his good intentions, kinda screwed the franchise by leaving a huge domestic mess to be cleaned up in the next film.

Or they start over from scratch and have Superman Returns remain an anomaly in the character's cinematic history. Like the retarded cousin no one wants to mention.

Personally, I say Warner Bros should call up Tim Burton and Nicholas Cage now and let them make the film they were planning all those years ago. If only so that we can all see how this can ever kick ass. 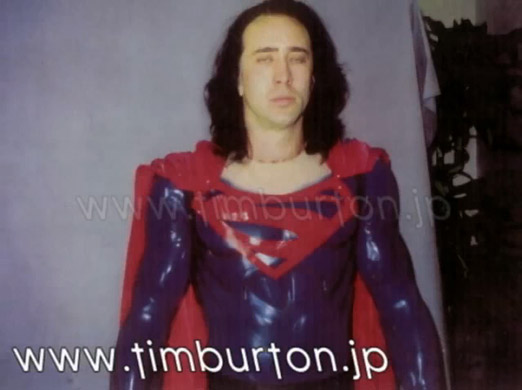 More:  Superman  Warner Bros  Bryan Singer
Follow us on Twitter @The_Shiznit for more fun features, film reviews and occasional commentary on what the best type of crisps are.
We are using Patreon to cover our hosting fees. So please consider chucking a few digital pennies our way by clicking on this link. Thanks!