Looking forward to the reboot of Fantastic Four? Wait, you are? You're obviously reading the wrong movie blog. Anyway, consider Michael Chiklis out of a job: Thing is going all CG, baby.

Obviously rebooting a franchise cures all its ills, because... well, look at Planet Of The Apes. Now that this miracle solution has become commonplace, any movie that even slightly disappoints has to go back to basics: even perfectly serviceable superhero franchises like Fantastic Four, which has already been remade once.

Marvel's special effects bods claim to have been listening to the fans' demands, which apparently involve the size of the Thing and not the size of Jessica Alba's bodysuit. Screenrant spoke to the guys in charge, who said the new Thing would be a CG creation.

"
"
"Thing is supposed to be a big, hulking, rock monster type creature who is able to lift hundreds, if not thousands, of tons [sic] and dwarf everyone on his team in size. This just can't be pulled off in a practical suit.

It would seem that the suits in charge of 20th Century Fox have heard the fans' complaints because I have it from a source inside the Fox SFX department working on the Fantastic Four Reboot that The Thing will officially be 100% CG."
(*dusts off hands*) Nice work, everyone! Problem solved! The Thing is CG now, tell your families to rest easy, because you'll be getting paycheques this month!

One more question: if they're making the Thing bigger, how are they going to show off all the product placements? 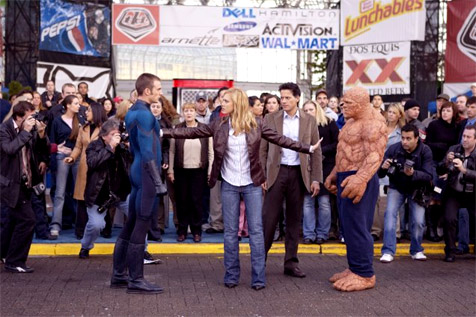 More:  Fantastic Four  Marvel
Follow us on Twitter @The_Shiznit for more fun features, film reviews and occasional commentary on what the best type of crisps are.
We are using Patreon to cover our hosting fees. So please consider chucking a few digital pennies our way by clicking on this link. Thanks!