Rumour has it, Chuck Norris has only agreed to appear in The Expendables 2 if they removed all the bad language and made it PG-13. Hey Chuck: FUCK YOU you FUCKING CHUCKLEHEAD.


One of the least hilarious 'hilarious internet memes' is the deification of Chuck Norris, whom the average joke-forwarder will have you believe is the most awesomest person on the planet. "LOL!" they'll say, usually on Facebook. "HE BEETS PPL UP 4 A LIVING & HAS AN #EPIC BEARD. WOT A LEGEND!!!!" I think we all have friends like that.

Prepare Chuck Norris' public persona to be turned like it's been roundhouse kicked in the face. There's probably a giant overlap of 'People who think Chuck Norris is LOLworthy' and 'People who think The Expendables is the best film ever', so news that Norris has demanded the sequel be released as a PG-13 should cause a ruckus among his fans.

The following quote is transcribed from an interview he did with Polish TV:

"
"
"With The Expendables 2, you have a lot of hard language in there that means that means that young people won't be able to see it. I said, I don't do movies like that. I didn't do them in the past, I didn't do them on my TV series. I said, you have to cut out all the language, hardcore language or I can't do it. So they did, and Expendables is now a PG-13 film so kids can see it."
Translation: it's fine to stab people in the neck with a hunting knife as Lone Wolf McQuade, but there's no need to use cuss-words while you do it.

First of all, there can't be a single 'young person' on the planet who actually knows why Chuck Norris is famous; most probably know him from being 'that judge from Dodgeball' or 'that guy from the World Of Warcraft advert who isn't Mr. T'. Secondly, how big is your ego that you demand an R-rated movie - one that shamelessly panders to fans of 80s action - be turned into a movie suitable for children?

Frankly, I doubt it's true. The Expendables' selling point was it was a movie full of badass guys, doing and saying badass things. I can't see Sylvester Stallone making snappy quips like, "Forget you, Mr Grumpus!" before he blows them away with a NERF gun. [Update: Turns out it's true. Sylvester Stallone just confirmed The Expendables 2 will be PG-13. FROWNY FACE - Ed]

I digress: back to the fucking you of Chuck Norris. You may not know this, because he hides it behind his beard quite well, but Chuck Norris is kind of a total asshole. Here are some 'hilarious' and real Chuck Norris facts: 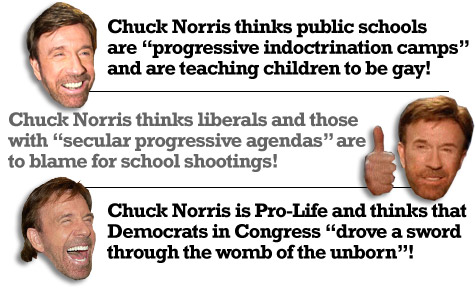 LOL, amright? Let's not forget, he famously endorsed douchebag Republican Presidential candidate Mike Huckabee in one of the world's most cringeworthy campaign videos ever...

... and he thinks that the Founding Fathers would cry because Bibles have been removed from some schools in America...

... let alone, of course, the fact that he appeared in that dreadful Warcraft advert, at least a decade after his meme stopped being funny.

Yeah, I know the entire basis for this Norris-bash-a-thon is because he apparently wants his 'younger' fans to see him playing action hero with the big guns, but it's important to remember how easily we lionise actors and entertainment personalities, and how messed up these people can be beneath their well-publicised 'movie star' personas.

I'm putting all my eggs in Mel Gibson's basket. There's no way the Aussie hunk of Mad Max fame can ever let me down!

More:  Chuck Norris  The Expendables 2
Follow us on Twitter @The_Shiznit for more fun features, film reviews and occasional commentary on what the best type of crisps are.
We are using Patreon to cover our hosting fees. So please consider chucking a few digital pennies our way by clicking on this link. Thanks!