Paddy Considine, actor extraordinaire and director of our favourite movie of 2011, has announced on Twitter that he's finished writing his new movie: an adaptation of Jon Hotten's true life tale The Years Of The Locust. As long as it doesn't open with a dog being kicked to death, it'll be the most exciting film of next year.


Tyrannosaur is the kind of film you don't forget, and although I'm in no rush to watch again (I still haven't replenished the fluids I lost last time round), it placed Paddy Considine firmly on the radar as a directorial talent to watch. He's selfish, really: not only does he boast an intensity as an actor roughly parallel to squatting on an atomic bomb, he's a talented filmmaker to boot. Leave some talent for the rest of us schmucks, guy.

Anyway, Considine has been hard at work since February 2012 on his new movie, an adaptation of The Years Of The Locust, a novel by author Jon Hotten. I haven't read it yet (Arnie's autobiography is next on my read list) but Amazon says it's a true story set in the American South in the '90s, following two men; one, a "freakishly fat ginger-haired giant" boxing promoter; the other, a former NFL pro turned fighter. Bleakly funny, it says. Scary and sad, it says. I swear, as soon as I'm done with Schwarzenegger's Total Recall, I'm moving on to this.

Considine tweeted earlier today that he was done with his screenplay, and was now looking for funding. Here's his pictorial proof if you don't believe me. Why wouldn't you believe me? I thought we were cool. 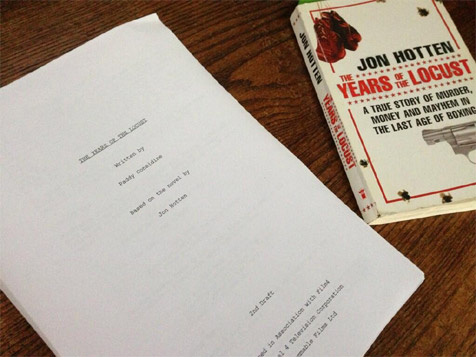 All that remains is for Considine to find $20 million to make it, and to find a freakishly fat ginger-haired giant to cast in the lead. Hmm, let me think. I hear this chap likes movies? 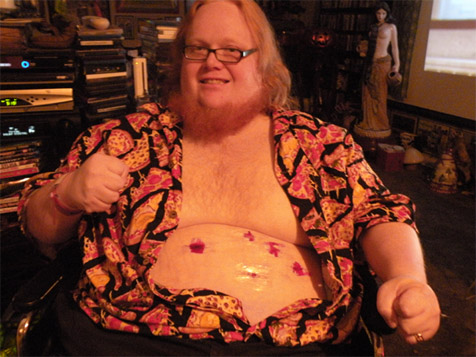 Oh, Harry. You know I love you. I just hate your website and what you represent.
More:  Paddy Considine  Jon Hotten  The Years Of The Locust  Tyrannosaur
Follow us on Twitter @The_Shiznit for more fun features, film reviews and occasional commentary on what the best type of crisps are.
We are using Patreon to cover our hosting fees. So please consider chucking a few digital pennies our way by clicking on this link. Thanks!