Here's your first picture of Daniel Radcliffe, Rupert Grint and Emma Watson in Harry Potter And The Deathly Hallows. With it, comes news that Potter gets his dong out in a dream. Yeah, in your dreams!

USA Today have the first pic of Harry Potter And The Deathly Hallows, and via the magic of Copius Pastus, so do we. Down there, look. What an absolutely thrilling picture it is too. I can only assume the movie's costume designer is a fucking idiot.

In marginally more interesting news, director David Yates has claimed in a new interview that Deathly Hallows will feature a scene in which Radcliffe flashes his wand while making out with Hermione. Your finest filthy fan fiction brought to the big screen? No, just a dream sequence.

"
"
"A horcrux defends itself by producing nightmarish visions, and one shows Hermione and Harry embracing and kissing... It's something intriguing and sensual for Rupert to react to, and Dan will be bare for that."
This is despite Yates apparently calling a similar rumour "a complete fabrication". Whatever, dude. It says everything about this franchise that all that fuss has been over whether Daniel Radcliffe will flash his junk or not, and no one has even mentioned whether or not Emma Watson will be equally naked. I don't understand anything any more. 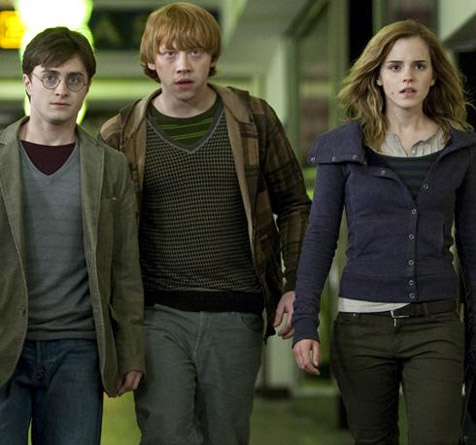 Ron was winning the Jarvis Cocker fancy dress competition
More:  Harry Potter  Harry Potter And The Deathly Hallows
Follow us on Twitter @The_Shiznit for more fun features, film reviews and occasional commentary on what the best type of crisps are.
We are using Patreon to cover our hosting fees. So please consider chucking a few digital pennies our way by clicking on this link. Thanks!