Have another dozen on us, says Cowell publicity team

The goons who keep Simon Cowell's publicity machine rumbling on like some sort of vast, unrelenting, Gulag-bound people-carrier tonight offered free eggs for anyone else who wants to do them a massive favour.


"Of course, we've been aware for some time that Britain's Got Talent is a TV show entirely devoid of merit," said a spokesperson. "It's not easy promoting it: there are only so many faked non-stories about judges bitching about each other you can put out."

But on Saturday their prayers were answered when viola-mimer Natalie Holt threw eggs at Cowell from the stage during a live broadcast.


"Everything she said afterwards about TV talent shows' stifling of creativity is of course perfectly correct," the spokesperson went on. "We've successfully managed to foster the notion that if you have any small amount of singing or dancing talent then any alternative career is unthinkable.

"Where once the idea of fleeting celebrity was greeted with circumspection, we've achieved over 70% inward buy-in to what we call 'positive negativity saturation': namely where we don't even have to pretend that a successful career in showbusiness is actually on the table at the end of the competition, or even that it's necessarily desirable. We barely even bother releasing the winners' records. And yet somehow every Tegs, Gonch and Zammo still wants in.

"Which is why we're all sitting round on our beanbags scratching our heads at why she wanted to give us so much free publicity. No one's talked about Britain's Got Talent since that guy who juggled his own kidneys two years ago, but all of a sudden every major news outlet wants a piece of us. Twitter's talking of nothing else.

"We've even seen a 6% upsurge in people remembering who the fuck Amanda Holden is." 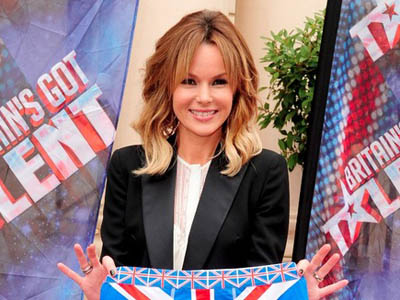 Holden: in a recent poll, 24% of respondents declared themselves "sure or fairly sure" she was a human being and not made-up.


"So look, if anyone else wants to do it, the eggs are on us. Sky's the limit. Even those expensive blue duck eggs you get in Waitrose.

"Seriously, just drop round the office. We'll make you an omelette."

More:  Simon Cowell  Britains Got Talent  ITV
Follow us on Twitter @The_Shiznit for more fun features, film reviews and occasional commentary on what the best type of crisps are.
We are using Patreon to cover our hosting fees. So please consider chucking a few digital pennies our way by clicking on this link. Thanks!