The prison in which Bates is serving his time in Downton Abbey is so wonderfully nice and cosy that HM Prison Service is to trial a new facility based on it, a spokesperson has confirmed.


Despite claiming with ear-melting constancy for years that prisons are like holiday camps, the British public has been won over by the spiffing condition of the prison in which Downton Abbey's John Bates is doing his time, and HM Prison Service has today announced a new initiative in reaction.

"
"
Obviously Downton has made us all take a long, hard look at ourselves, and we've realised that prisons can be places where all the inmates wear pristine fluffy grey uniforms and never utter a swearword worse than 'perishing'.
At the pilot Jolly Nice Gaol, mornings will see inmates enjoy a breakfast of hot buttered crumpets with lashings of raspberry jam or marmalade, before two hours of free time in which activities such as shove ha'penny, piano recitals and charades will be laid on. 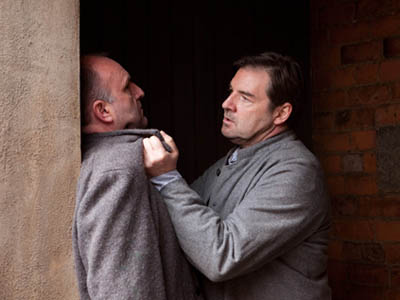 Bates upbraids a ruffian who tried to make off with his pumice stone.

In the afternoons, prisoners will be expected to read improving books in the library or play croquet in the grounds.

The spokesperson warned, however:

"
"
Don't think this means a free ride for transgressors, though. A code of conduct will be in place. Say an up-to-no-gooder attempted to pilfer the last piece of Battenburg from the prison pantry, for example: they'd be denied lawn tennis privileges for a week. Possibly two. 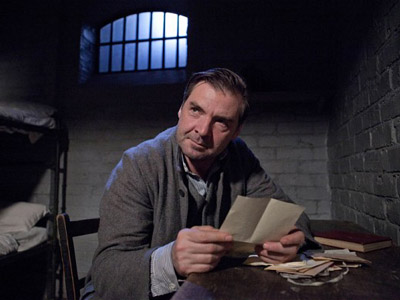 Bates demonstrates how prisoners might spend their free time: writing a letter to the editor of The Times expressing concern at proposed changes to the lbw rule.

In further tough measures, prisoners will also be expected to attend elocution lessons in order to root out and eliminate any habit of using double negatives, as well as remove their cloth caps whenever addressed by a guard or anyone of a higher social class in order to instil a sense of their position in the natural order.

"You mean to say prisons are a real-life thing that people actually go to?" he said to an interviewer. "I had no idea they existed in real life. I thought we just shot people as soon as their income dropped below a certain level and had done with it."

More:  Downton Abbey  Julian Fellowes  ITV
Follow us on Twitter @The_Shiznit for more fun features, film reviews and occasional commentary on what the best type of crisps are.
We are using Patreon to cover our hosting fees. So please consider chucking a few digital pennies our way by clicking on this link. Thanks!