Hugh and a Half Men?

Ha! I bet no one else came up with that headline to report the news that Hugh Grant is in talks to take over from Charlie Sheen on Two and a Half Men! (*conducts Google search*) Oh. Oh, right.

With its lead actor fired in circumstances that garnered very little publicity, and in no way brought to mind the phrase 'massive great mountain out of a molehill', Two and a Half Men finds itself in limbo halfway through its eighth season.

But help might be on its way in the shape of Hugh Grant, who is said to be negotiating a deal with CBS to replace Charlie Sheen.

Insiders say Grant is fully committed to getting the part, and has already begun carrying out the same research for the role that Sheen conducted so diligently: 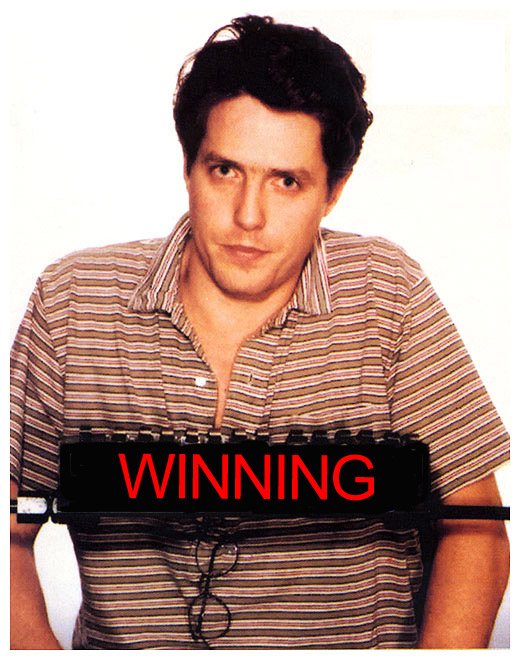 Look, I'll level with you. I wrote this and then woke up this morning to find out that Ashton Kutcher not Hugh Grant will be taking over from Sheen's drug-addled vacuous grin. But by that time, we had already Photoshopped the above pictures. What were we going to do, waste them?

More:  Two And A Half Men  CBS  Charlie Sheen  Not Hugh Grant After All  Actually Ashton Kutcher
Follow us on Twitter @The_Shiznit for more fun features, film reviews and occasional commentary on what the best type of crisps are.
We are using Patreon to cover our hosting fees. So please consider chucking a few digital pennies our way by clicking on this link. Thanks!