I guess I should say something about Jurassic Park 4

I'm sure by now you've already heard the news, but as the internet's second most enthusiastic Jurassic Park fan (go extinct already, Gary) I feel I should clarify my official statement regarding the announcement of a June 2014 release date for Jurassic Park 4. My statement is as follows: (*faints theatrically*)


Shit. It's really happening. This is a reality I now have to live in. I'd better start formulating my opinion on Jurassic Park 4, because in about 500 days, it's going to be an actual thing showing in actual cinemas featuring actual dinosaurs. Universal have announced that JP4 - or JUR4SSIC P4RK, as I'm calling it from now on (actually, forget it) - will hit cinemas on June 13th, 2014. That's next year. NEXT YEAR. Shit. It's really happening.

My head started swimming at the news. Steven Spielberg will produce, but not direct, although the recent delay in production on Robopocalypse isn't helping rumours he'll 'do a Peter Jackson'. According to the internet equivalent of a 'concerned onlooker', JP4 will be shot in native 3D. The screenplay is being written by Rick Jaffa and Amanda Silver, of Rise Of The Planet Of The Apes fame. These are things we know. What we don't know is which dinosaurs will fight each other and WHY. Therein lies a world of possibilities of -saurus on -saurus action. 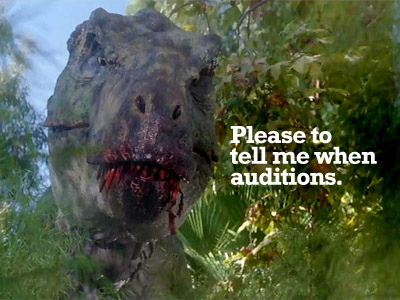 Of course, it could be terrible. It could easily be terrible. If someone asked me to write a terrible Jurassic Park movie, I'm pretty sure I could do it no problem. So what to think? Should I be excited? Terrified? Excitified? If I've learned anything from watching HD repeats of Friends on Comedy Central, it's that Chandler thinks I should make a pros and cons list to help me decide how I feel. (I think Jurassic Park 4 is Rachel in this analogy).


In conclusion, I love dinosaurs and am basically Ross from Friends. Goddammit, this information doesn't help anybody.

More:  Jurassic Park 4  Jurassic Park  Steven Spielberg
Follow us on Twitter @The_Shiznit for more fun features, film reviews and occasional commentary on what the best type of crisps are.
We are using Patreon to cover our hosting fees. So please consider chucking a few digital pennies our way by clicking on this link. Thanks!