I want to go to there

Some mad genius with too much money in America has opened a real-life Jurassic Park (although for 'real-life' read 'animatronic' and for 'Jurassic Park' read 'Not affiliated with Jurassic Park in any way').


While so-called 'scientists' continue to waste government funding by curing disease and cracking the human genome, one bright spark in America has cut out the middle-man and decided to forgo the discovery of ancient dinosaur DNA and go ahead and open his own Jurassic Park-based theme park. (*John Williams music kicks in*) My dear friends: welcome to... 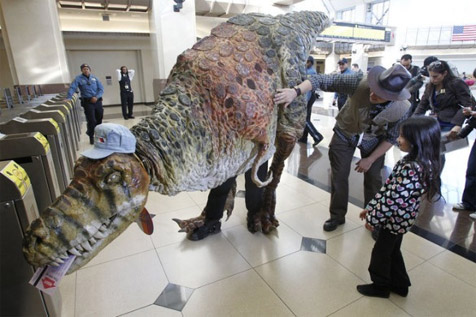 Admittedly, it doesn't have quite as catchy a title as Jurassic Park. Also, instead of charismatic silver fox John Hammond running the show, it has this guy, who can't even read from a bit of paper properly.

Pro tip: use a dictionary definition in your speech to win an Oscar.


Field Station: Dinosaurs is a 24-acre 'expedition' (officially not fun enough to be classified as a 'theme park' then) which will feature 31 life-sized animatronic dinosaurs, which will 'roam' in their natural environments exactly as they would if animatronic dinosaurs hadn't been made extinct in 1993. Unfortunately for you, the park is in New Jersey, unless you live in New Jersey, in which case, how unfortunate for you.

In truth, this all looks pretty swanky - a cut above the poxy three animatronic dinosaurs you'll find in the Shnatural Shistory Shmuseum - and with costs coming in at $2 million, you'd expect the dinos to at least look and move realistically. I just hope the park's owners are careful about who they hire to run their security systems.

Yes, a Jurassic Park joke. What an unexpected note to end on.

More:  Jurassic Park  Field Station Dinosaurs
Follow us on Twitter @The_Shiznit for more fun features, film reviews and occasional commentary on what the best type of crisps are.
We are using Patreon to cover our hosting fees. So please consider chucking a few digital pennies our way by clicking on this link. Thanks!