In lieu of any real news, Reuters compare Bin Laden to Harry Potter

It's been a slow news week thus far, so respected international news agency Reuters just made up some shit about the "eerie links" between the life of Osama Bin Laden and Harry Potter.


I'd expect this sort of lazy, inaccurate, pointless waffle from The Daily Mail or the New York Post, but honestly, Reuters? An article comparing the similarities of Osama bin Laden and Harry Potter? Was there really nothing else more important to write about? Not even a dog stuck in a tornado or something? Jesus.

The article begins with the enticing headline:

Okay. You have my attention. Hit me with your best shot.

"
"
"While Hollywood scrambles to figure out ways to exploit the death of Osama bin Laden on screen, the first movie that could actually benefit from the news is likely to be the final Harry Potter movie, "Harry Potter and the Deathly Hallows: Part 2," which comes out on July 15."
Right. That sounds like a ridiculous statement - that a family-friendly movie franchise about a teenage wizard might benefit from the death of the world's most wanted terrorist - but I'll go ahead and assume you've got a killer second paragraph up your sleeve.

"
"
"While Warner Bros have never pushed the comparison, the entire Potter saga -- both the books and the movies -- have an inevitable subtext, colored by the events of 9/11."
Oh God. This really is the most stupid thing I have ever read in my life. "Warner Bros have never really invited comparisons between their fictional wand-waving simpleton and a mass-murdering terrorist, but..." GOLD STAR FOR REUTERS. I like the way that, throughout this article, writer Gregg Kilday actually contradicts his own "eerie links", by immediately disregarding each idiotic point he makes.

For example, after mentioning the subtext of 9/11, he says...

"
"
"While the first volume in J.K. Rowling's seven-book series was originally published in England in 1997, the first movie, "Harry Potter and the Sorcerer's Stone," was released in November 2001, just months after 9/11."
So unless JK Rowling is some sort of mystical soothsayer, you're talking absolute shit, then?

"
"
"First referred to only as "He Who Must Not Be Named," Voldemort is introduced as something of a formless boogie-man -- not unlike the mysterious Osama -- [Fucking hell, seriously - Ed] but then, over the course of the series, takes on more and more of a physical presence until in the last volume he and Harry go head-to-head in a final, cataclysmic battle.
Way to make light of the most important military operation in recent history, you utter, utter bellend. But wait, there's more! 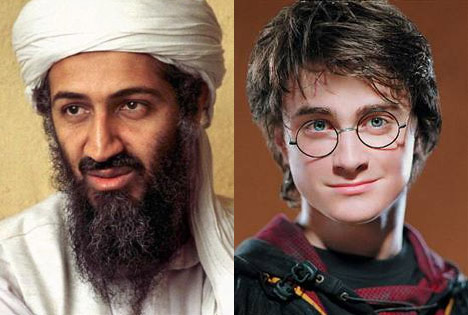 But which one is the REAL monster?

"
"
"Back in 2004, a poster on mugglenet.com made some of it explicit, comparing the Death Eaters to Al Queda and noting of that "just as Voldemort was shaped by his mother's death and his father's abandonment, Osama was shaped by his personal struggle between Western pleasures and Islamic discipline."
Just the kind of informed opinions you want to use for your international news story - posters on a Harry Potter messageboard.

"
"
"just as Harry is known in the books as "the anointed one," a number of President Obama's critics like Rush Limbaugh have frequently dismissed the president by disparagingly referring to him as "the anointed one" as well -- though on Monday, even Limbaugh had praise for how Obama orchestrated Osama's demise."
THIS IS GETTING SCARY.

"
"
"Meanwhile, in the wake of bin Laden's death in a mansion near Islamabad, a meme has already popped up on the web, noting the weird coincidence that Osama and Voldemort both died on the same day, May 1.

"But true Potter fans have been quick to point out that's not quite true: When Harry and Voldemort actually finally come face-to-face in the Battle of Hogwarts, in the books' chronology the date is really May 2, 1998."
Fans of facts may have also pointed out that the date of bin Laden's death is listed as May 2nd as well, but don't let that stop you, Gregg. Or should I say... Severus Snape! (*dun-dun-duuun*)

"
"
"Of course, even without an end to bin Laden, the final Potter movie is already on track to be one of the biggest movies of the summer. The franchise has already grossed more than $6.3 billion at the worldwide box office.

"But bin Laden's death is now likely to give the movie an extra emotional resonance for the Potter generation, and that could translate into an even bigger box office bonanza."
There it is, folks: another momentous occasion in a week full of momentous occasions - the stupidest sentence ever written. This berk is actually suggesting that the death of Osama bin Laden will help boost the box-office of Harry Potter And The Deathly Hallows: Part II. Which doesn't even come out until mid-July. It could set a dangerous precedent - if Green Lantern's box office starts flagging, DC Comics could always put a hit out on Ayman Al Zawahiri.

Ugh, I feel stupider just for having analysed this pointless, offensive, piece of shit fluff piece. Maybe I should apply for freelance at Reuters.

More:  Harry Potter  Osama Bin Laden  WTF
Follow us on Twitter @The_Shiznit for more fun features, film reviews and occasional commentary on what the best type of crisps are.
We are using Patreon to cover our hosting fees. So please consider chucking a few digital pennies our way by clicking on this link. Thanks!