Given the total lack of young, bald actors in Hollywood - at least, actors who aren't weak, frail and on some sort of treatment - Matthew Vaughn had free reign to cast his proto-Professor in X-Men: First Class. Sticking with a Brit, he chose James McAvoy, who'll have to tone down his Celtic brogue and start practising his Patrick Stewart impression. Get that man a Next Generation box-set, stat!

There's also a rumour that Kick-Ass star Aaron Johnson might be in the mix for a part, after a pap shot showed him exiting a building with Vaughn and McAvoy. He'd probably play either Cyclops, leader of the formative X-Men, or possibly even Magento, former friend and soon-to-be nemesis of Xavier.

That, or maybe they were just taking advantage of the amazing new summer menu at Wetherspoons, who can say? 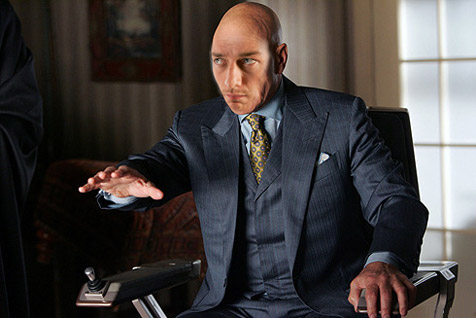 More:  X-Men First Class  James McAvoy  Patrick Stewart  Aaron Johnson
Follow us on Twitter @The_Shiznit for more fun features, film reviews and occasional commentary on what the best type of crisps are.
We are using Patreon to cover our hosting fees. So please consider chucking a few digital pennies our way by clicking on this link. Thanks!