Kevin Smith still smashing the system, being an insufferable berk

That Kevin Smith, he's a loose cannon! He's a maverick! He's a liability! He's self-distributing his new movie, Red State, and making a total hash of it! But what do I know: I'm just a critic. (*boo hiss etc*)


Apparently bored of telling dick and fart jokes, Kevin Smith has decided to circumnavigate the system in releasing his new horror movie, Red State. Earlier this year, he caused a ruckus at Sundance by auctioning off distribution rights to Red State... to himself. Then he totally went home, slammed his door and refused to tidy his bedroom. Take that, The Man.

I jest, because it's a noble - if flawed - experiment: cutting out the middle man gives the director more control over the release of his movie, and for an auteur like Smith, that's probably right up his street. There's no chance of mis-marketing, no moaning about release date clashes, no chance the movie will be misrepresented at all. Smith literally took the movie on the road, and all power to him, because it appears audiences rather liked it. It's certainly got people talking more than Cop Out did, anyway. 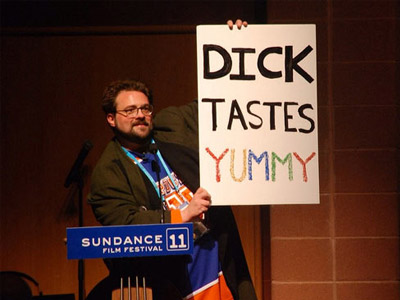 
My problem with Kevin Smith is not with the new business model he's chosen, but the fact he now seems to be singling out film critics as the root of all evil. It's no coincidence that Cop Out was his biggest critical flop since Jersey Girl. Shortly after release, Smith targeted the press as the problem - now he's attempting to cut critics out of the equation completely.

Publicists eOne Entertainment were supposed to be hosting a press screening of Red State at 9pm tonight in London. This is common: both print and online press usually get to see a movie some weeks before release and are free to review the film, subject to official embargoes.

Except Kevin Smith just personally cancelled the screening. At 5.30pm. He literally called up eOne's offices and requested they postpone the screening for a later date. His official excuse? "It just needs an intro we're sending over." Right-o. Let's put this down to bad planning.

This may come across as little more than whinging, but it really isn't - I wasn't even going to the screening myself, but know a handful of people that were. Even our poor Matt had already made the journey.

The problem is, Smith doesn't seem to realise how much damage he's doing his reputation pulling these sorts of stunts. After fielding a few polite questions from a couple of rightfully disgruntled folk who were en route to the screening, Smith used their inquiries to launch into another anti-press tirade, aimed squarely at the people whose evenings he'd just messed up. 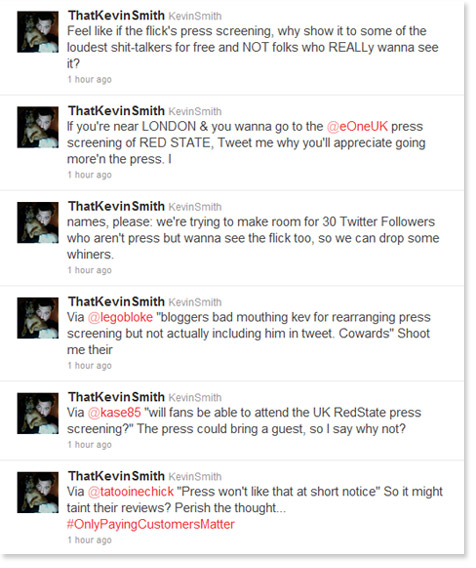 Yeah, #OnlyPayingCustomersMatter! Here paying customers, have some free tickets! Free tickets to the press screening. As I speak, Smith is busy filling out the entire press screening with 60 members of the public - basically anyone who sends him a sycophantic tweet gets in (much, I'm sure, to the chagrin of PRs eOne, who I'm assuming don't have tyrannical directors rearranging their schedules every day of the week).


I get Kevin Smith bashing critics if they take chunks out of his movie. But effectively banning critics from their own screening and talking shit about them before they've even had a chance to talk shit about him? That's pre-emptive douchebaggery and speaks volumes about Smith's own confidence in his movie. If you hate the press so much, why even hold a press screening at all?

Of course your biggest fans are going to like it. They're already fans. The job of a critic is to give a valid and balanced opinion to everyone else. Either Smith genuinely feels like such a profession is outdated and unnecessary (which is fair enough, and invites discussion) or he's just being incredibly savvy and - using that control we spoke of earlier - making sure no dissenting voices are heard before the movie's release. That sort of behaviour is usually left to the Saws and Big Mommas of the industry.

Smith is also seemingly unaware that he still has fans in the press community, and not everyone attending this event is a "shit-talker". I'd wager maybe half of the 'press' that would have been in attendance tonight would have been there representing large media outlets with considerable sway; the other half, sadly, was probably made up of bloggers and avid fans like me. You know, the people who bought all Smith's DVDs and championed his movies back when he was still starting out. We suffered through MALLRATS for you, man. MALLRATS.

This is not a knee-jerk reaction: the cancellation has affected me in no way whatsoever. It's just sad to see a once-talented, affable and apparently approachable director turn on the writers and critics who helped make his name. I'm all for him screwing the system, but does he have to be such an arse to everyone else? I preferred him when he was silent.

More:  Kevin Smith  Red State
Follow us on Twitter @The_Shiznit for more fun features, film reviews and occasional commentary on what the best type of crisps are.
We are using Patreon to cover our hosting fees. So please consider chucking a few digital pennies our way by clicking on this link. Thanks!