It's the day after the Oscars, which really should mean we're free to talk about anything BUT the Oscars, but no. Oscar talk is still on everyone's lips. Ho hum. Here's my mandatory Oscar post, including my mandatory thoughts on last night's awards, and some mandatory funny pictures. Mandatory.


This is going to be rambling and unfocused as hell because I've been up since 5am, but let's get this out of the way first and foremost: 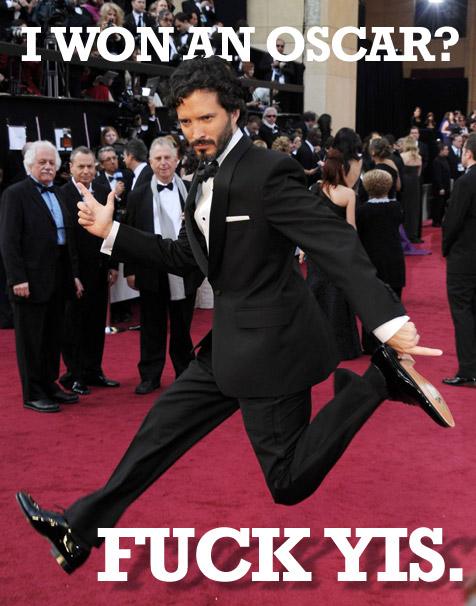 Flight Of The Conchords star Bret McKenzie writing the music for The Muppets is one of those forehead-slappingly perfect decisions that was just so right, so I was utterly thrilled to see him win an Oscar for Best Original Song. The fact that he popped this delicious little dance move - note the face - on the red carpet just hours before taking to the stage gives him a previously unheard of score on the Man-Crush Rudd-O-Meter.

And hey, while I'm talking about men I'd like to spoon, let's talk Jean Dujardin. I think I'm more thrilled for him winning Best Actor than for The Artist's win for Best Picture, not only because it was less of a sure thing, but because it might not have been immediately obvious to voters how difficult it is to give a truly memorable performance with your body alone.

Really though, I love him because of his one-man crusade to play up to popular internet memes. Here he is giving more fodder to the Jean Dujardin Sleeping On People tumblr: 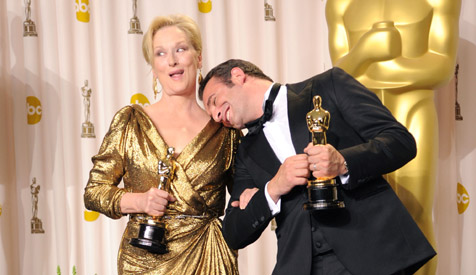 And here he is practising his 'Awww Yeeeah' face, collecting his Oscar: 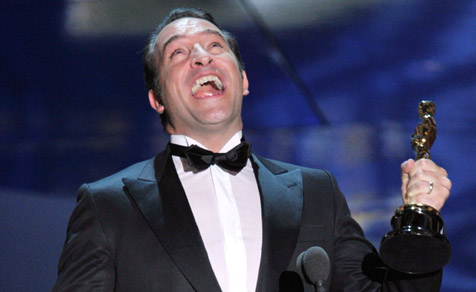 You don't ever see Nicolas Cage attending the Oscars wearing his bee helmet, do you? And that's why Drive Angry wasn't nominated.

I'll be honest, you guys: I didn't stay up to watch the Oscars this year. That's because a) I don't have Sky Movies because FUCK YOU MURDOCH (and I can't afford it), and b) there seems to be nothing lost by catching up with all the goings-on the morning after. Yes, a few of you night owls might have bragging rights to seeing Sacha Baron Cohen acting like a predictable cunt on the red carpet a few hours earlier than me, but I can live with that.

Not only does sacking off the ceremony mean I can sleep normal, human hours, but it means I can watch the nicely condensed, manageable version of a gargantuan four-hour ceremony. It also means I could see Billy Crystal's 'best bits' in a short, 150-second YouTube video. I get that Crystal is a safe pair of hands compared to the catastrophic fumble of HathaFranco, but BY CHRIST, he seemed dull. I never thought I'd pine for the comedy of modern-day Eddie Murphy.

For my money, Seth Rogen should host the Oscars next year, if only so I can hear exactly what it sounds like when a room full of monocles fall into champagne glasses at the sound of a Tom Cruise gay joke. Here's Rogen hosting Saturday's 2012 Independent Spirit Awards with his customary self-deprecation:

Okay, he runs out of gas a little towards the end, but it's worth sitting through for his Michael Fassbender penis jokes and his frank admissions on not really knowing how to sell a gag on Win Win.

Oh, right! The Oscars! I almost forgot. Frankly, until I see that Christopher Guest Wizard Of Oz sketch that YouTube seems to have dropped behind the sofa, the only bit of the ceremony that worked for me was Emma Stone's mock-banter (kill me) with Ben Stiller. She's INSANELY confident yet utterly sweet and funny and oh god, control yourself man. Seriously, if she was any more adorable she'd be a fucking kitten.

Grumbles? I have very few. It's only now I realise how awful it looks that the two films that won the most Oscars just happen to be films about how brilliant Hollywood is, but there's no denying The Artist and Hugo both deserve their awards - thankfully, no one mentioned anything about the latter being the second biggest flop of 2011 behind Mars Needs Moms.

The Sacha Baron Cohen Dictator thing got old before he'd even set foot on the red carpet (although I did enjoy the line, "It's like Saddam Hussein told me: socks are socks"), and that sort of pre-calculated PR event is more suited to the likes of the MTV Movie Awards. It did, however, lead to my favourite photo from the 2012 Oscars: Jason Segel being confused at a man dressed like a Ghostbuster hoovering on the red carpet: 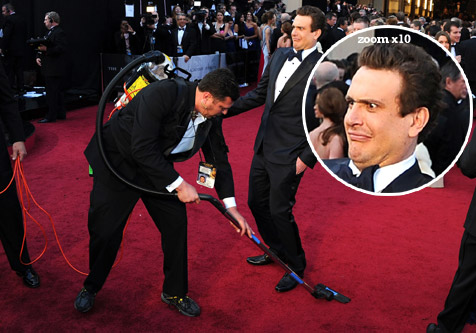 At least we can say the best film won: The Artist truly is a work of art; a proper motion picture like what your nan might have watched on the wireless or something. Anyone who tries to start a backlash needs to be punched in the throat immediately, because people who fail to find joy and wonder in a film as delightful as The Artist will most probably go on to commit all sorts of hate crimes in later life. 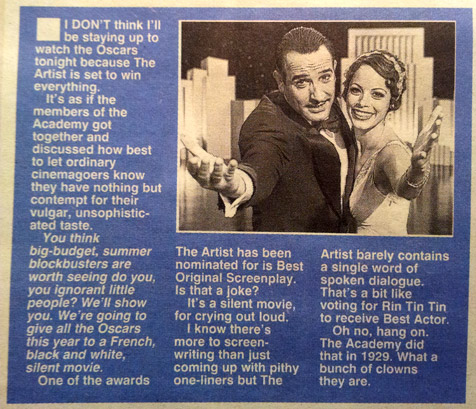 
Can we talk about something other than the Oscars now, please? Like, maybe, what Nick Nolte might have been looking at here? 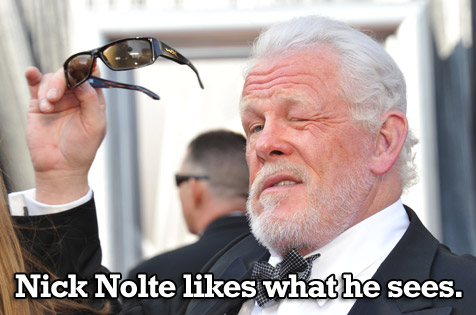 More:  Oscars  The Artist
Follow us on Twitter @The_Shiznit for more fun features, film reviews and occasional commentary on what the best type of crisps are.
We are using Patreon to cover our hosting fees. So please consider chucking a few digital pennies our way by clicking on this link. Thanks!