Megan Fox out of Transformers 3

Tsk. You compare one director to Hitler and look what happens.

Michael Bay is famous for spreading misinformation about his Transformers movies, which is cute, because he thinks people care. That said, Deadline are reporting that Megan Fox is off the project and that she'll play no part in Transformers 3. Ouch.

According to Nikke Finke's source, it was "ultimately Michael Bay's decision" which will lead most people to think that this is Bay getting his own back for some of Fox's cruder comments to the press about his directorial dictatorship. Last year, she called Bay "a nightmare to work for" and compared him to Hitler, while recently she claimed the director was forcing her to tan excessively for the part - clearly the actions of a delightful boss.

Whatever. Firstly, this is probably a lot more boring a story than it sounds. If Megan Fox has left Transformers 3, it was probably a mutual decision - it's extremely rare for an actor to get out and out fired these days, and Bay made light of Fox's Hitler comment at the time. Secondly, it's Transformers 3: who gives a shit? They could just paint a pair of lips on a balloon and have it float through scenes of fighting robots and no one would even notice.

For some reason though, it's quite fashionable to beat on Megan Fox, so I'll expect a torrent of "she had it coming" whinges from various opinion-spewers. Personally, I can't stay mad at her for long. I guess her wonky thumb is a little weird, but I think we could work past it. 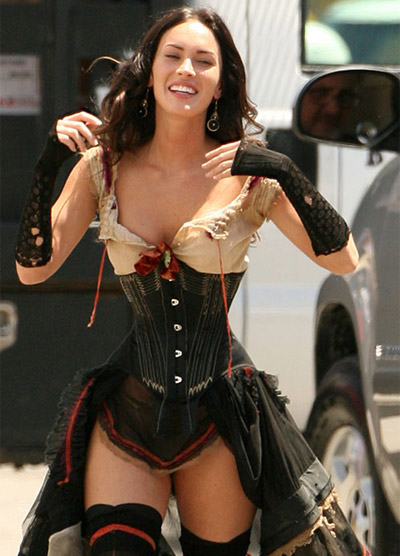 Megan Fox, yesterday (note the creepy stalker in the mirror)
More:  Megan Fox  Transformers  Transformers 3
Follow us on Twitter @The_Shiznit for more fun features, film reviews and occasional commentary on what the best type of crisps are.
We are using Patreon to cover our hosting fees. So please consider chucking a few digital pennies our way by clicking on this link. Thanks!