Actual quote: "One of the things I like about Genghis Khan was his love of dogs." That and his brief stint in the Mongolian WWE.

I feel a mixture of awe and pity for Mickey Rourke. Awe, because he's awesome, naturally. But pity? The poor guy has such a busted face - brought on himself via some extremely ill-advised lifestyle choices, it has to be added - that he can never really play any roles other than... well, people with busted faces.

This is why the news that he's apparently set to play Genghis Khan made me go WHHHHAAAAAAA? Just like that. Or maybe it was more HUUHHH?

Talking on the set of new movie Immortals, Rourke revealed he'll be playing the Mongol legend in a new movie directed by John Milius, writer of Apocalypse Now and director of Conan The Barbarian.

"
"
"I read his script and you know, the man is known for his tough writing. He wrote Conan and Dirty Harry and Apocalypse Now, and it'll be interesting to see how he works behind the camera.

I'm playing Genghis. John wrote as a piece told from the son and grandson's point of view, how they saw this mythic figure from their family. You see him in flashbacks, back when he was in his mid-40s."
Presumably the movie will focus on the period of Khan's life after he'd just had plastic surgery, bleached his hair and started coddling puppies. Actually, that last point isn't too far from the truth.

"
"
"One of the things I like about Genghis Khan was his love of dogs. The Mongols used dogs in battle, and dogs rarely made it out of the battle. But in one instance, in this script, he orders his men - 'Hold the dogs back.' He was looking out for the dogs. I like that."
Also he used to rape women and eat babies. The other thing I feel about Mickey Rourke is that I can never tell whether he's full of shit or not. This is one of those times where I'm hoping he's just razzing us, but I fear not. Still, it can't be any more offensive than the time John Wayne played Genghis Khan. 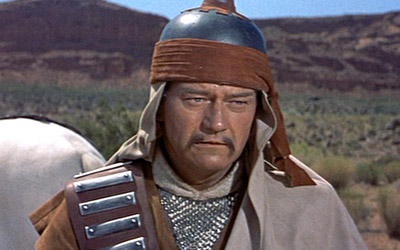 John Wayne is a Mongol, your argument is invalid.
More:  Mickey Rourke  Genghis Khan  John Milius  Terrible Ideas
Follow us on Twitter @The_Shiznit for more fun features, film reviews and occasional commentary on what the best type of crisps are.
We are using Patreon to cover our hosting fees. So please consider chucking a few digital pennies our way by clicking on this link. Thanks!