Shooting has begun on Joe Carnahan's refit of The A-Team and one keen-eyed snapper has spotted the team's trusty van on set. Either that or they screen-grabbed one of the old DVDs, because it looks exactly the same.

Not really sure what I was expecting from a story with the headline 'New A-Team Van Spotted!' to be honest. I know people who would literally kill you where you stand if you bad-mouth The A-Team, so changing their iconic GMC was never really an option. Besides, as we know, the only people who can mess with eighties nostalgia are Will Smith's offspring.

Still, this photo gets a big fat shrug from me, much like the idea of the new A-Team movie itself. The casting is uninspiring (aside from District 9's Sharlto Copley as Murdock), the concept is out-of-time and the tone will no doubt flirt queasily with the ironic appreciation brigade. Colour me unimpressed.

Or maybe I'm just pissed that Mr. T has had to resort to selling chocolate bars. Harumph.

Click the pic to see the original at Splash News Online 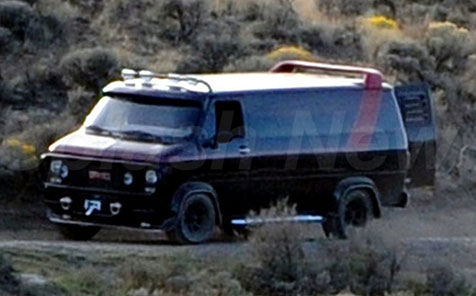 More:  The A-Team  Pics
Follow us on Twitter @The_Shiznit for more fun features, film reviews and occasional commentary on what the best type of crisps are.
We are using Patreon to cover our hosting fees. So please consider chucking a few digital pennies our way by clicking on this link. Thanks!