New Rise Of The Planet Of The Apes poster is, er, good question

Just what the world needed - another hilariously shitty movie poster. This one does have angry apes throwing 'black power' salutes in front a burning city whilst helicopter gunships circle overhead, though.


You may have noticed we cover quite a lot of movie poster news here at Shiznit Towers. Besides the films themselves, and the trailers, it's always fun to see what the artists and marketing people can come up with on a static canvas to pique our interests. Also they take up lots of vertical space, so it looks like we did loads of work.

But today there will be no fun. Behold this utterly craptastic poster for Rise Of The Planet Of The Apes - born surely from an attempt to make the on-screen apes look better, because what we've seen so far has been a mixture of "ok, that's quite convincing," to "Filmation's Ghostbusters are back!" Anyway behold: 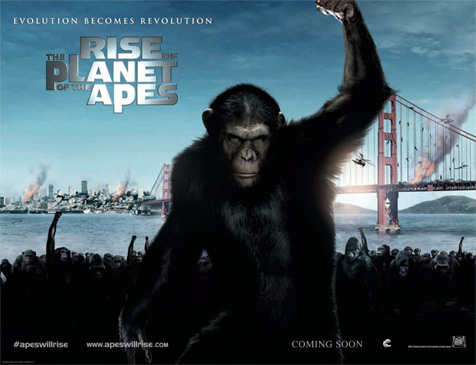 Did you beheld? Any hint of the 'Uncanny Valley' WETA are aiming for has been 'shopped out of existence - thereby rendering the CGI apes pointless in a film where the gimmick is the CGI apes. You'd think showing off their lovingly rendered hairy faces would be number one priority. And since when is getting injected with a super serum "evolution"?

Also, I'm sure I've heard that tagline somewhere before...

In case you didn't already know, Rise is a sort-of remake of the fourth entry in the original Planet Of The Apes saga - except instead of a neat little paradox involving time-travelling chimps and Ricardo Montalban, we get some cobblers about a cure for Alzheimer's and James Franco. So they're nothing alike really. Which means the writers had free reign over the plot and neglected to pick up on the single greatest threat to humanity:

Those bastards! Let's kill 'em all...

OH MY GOD GIVE ME THREE!

More:  Rise Of The Planet Of The Apes  Monkeys  Posters
Follow us on Twitter @The_Shiznit for more fun features, film reviews and occasional commentary on what the best type of crisps are.
We are using Patreon to cover our hosting fees. So please consider chucking a few digital pennies our way by clicking on this link. Thanks!