GAAARRRR-FIEEEEEELD! Seriously though, congratulations to Andrew Garfield, who's landed the lead role in the new Spider-Man movie. Maybe he'll kick back with some lasagne. BURRRN! (*high fives self*)

Andrew Garfield is the new Spider-Man. Thank Christ. Not only because Garfield seems to be a great actor, but because thinking of some big fat Hollywood casting executive flicking through a giant portfolio of young boys in spandex made me feel a bit sick. The only problem I can see is that every time I see his name, I want to yell it out in mock rage, a la Jon Arbuckle.

So is this a good thing? Well, he's British, as if that actually means anything, and he's not Josh Hutcherson, or a Culkin, which I'm grateful for. Garfield (*snigger*) won a Best Actor BAFTA in 2008 for Boy A (see aforementioned Britishness for why) and he's appeared in The Imaginarium Of Dr Parnassus, Lions For Lambs and is soon to be seen in The Social Network. And I guess if he's good enough for Terry Gilliam, Robert Redford and David Fincher, he's good enough for a film about a kid being bitten by a radioactive spider.

Shame Jamie Bell didn't get it, though. He's got far more range if you ask me (which you are), plus I can't think of an easy way to make fun of his name. I guess I'd find another way to destroy his self-esteem somehow. 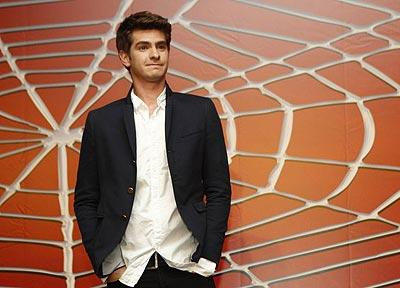 You are looking at one cool cat.
More:  Spider-Man  Marc Webb  Andrew Garfield
Follow us on Twitter @The_Shiznit for more fun features, film reviews and occasional commentary on what the best type of crisps are.
We are using Patreon to cover our hosting fees. So please consider chucking a few digital pennies our way by clicking on this link. Thanks!